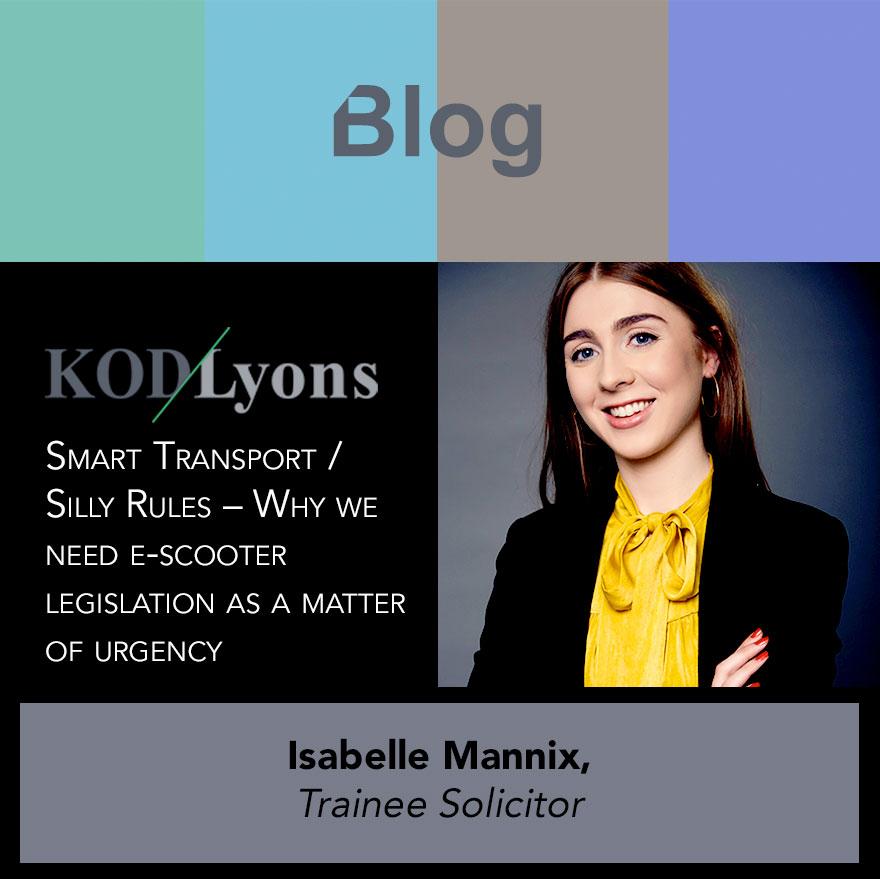 Over the past number years, e-vehicles have grown in popularity in Ireland with many people seeing them as an environmentally friendly commuter alternative to cars and public transport. However, despite their growing popularity, many may be shocked to discover that their use has not been specifically regulated for in Ireland.

In June, Minister for the Environment, Climate and Communications Eamon Ryan, TD, appeared before the Oireachtas Transport Committee to discuss the pre-legislative Road Traffic (Miscellaneous Provisions) Bill (the Bill). Amongst other things, the Minister is proposing to create a new vehicle category which will be known as ‘Powered Personal Transporters’ (PPTs) and will include e-scooters and similar devises. The proposed legislation will allow e-scooters to be used legally in a public place and will also address standards to be met by PPTs in the interests of safety. Tax, insurance and driving licenses will not be required. As the intention is to legalise the use of PPTs in a public place, they will now be regulated as to how and where they may be used.[1]

E-bikes are also being addressed by the new Bill. Under current Irish law, e-bikes are not classed as MPVs or as pedal bicycles. Under the Bill, E-bikes will now be legislated for using EU standards as a reference point and will be treated mainly in the same way as pedal cycles while the more powerful models of e-Bike will be treated as light mopeds.[2]

In Ryan’s opening statement, he said the Bill would more than likely not be ready for debate until the autumn.[3] This is disappointing given that discussion regarding the need for legislation in this area has been on-going for some time. Deputy Marc MacSharry remarked during a Dail debate on Wednesday 16th October 2019 that the Minister for Transport, Tourism and Sport discussed prevailing on the Road Safety Authority to introduce appropriate guidelines and considering legislating for e-scooters as far back as 2017.[4]

Under the Bill it is planned to differentiate the use of e-scooters depending on the size of their motor. Some more powerful models are proposed to be treated as light mopeds.  It is also expected that a number of safety measures proposed by e-scooter service operators will be introduced including:-

E-scooters are growing in popularity with or without legislation being introduced. However, with increasing usership and a lack of guidelines for users, it is risky business using an e-scooter at the moment. As recently as Sunday 14th August, two e-scooters were seized by gardaí in Co Donegal after people were seen using them on footpaths in Buncrana. In a statement, An Garda Síochána said that ‘e-scooters are defined as mechanically propelled vehicles and as such must be roadworthy. Users must also have insurance, motor tax and a driving licence.’ The Gardaí went on to say that ‘as it is currently not possible to tax or insure e-scooters or electric skateboards, they are not considered suitable for use in a public place.’[5] Given that this is the current position in Ireland, e-scooter users are facing fines, penalty points and even losing driving licenses. At this time, if you are riding an e-scooter, it is considered the same as driving a car without insurance.

A recent study carried out by Connolly Hospital Blanchardstown in Dublin found that more than half of people injured in e-scooter accidents were not wearing helmets.[6]The research, entitled ‘An Analysis of E-Scooter Related Trauma’, looked at 22 patients treated at Connolly Hospital after being involved in an e-scooter accident between October 2019 and November 2020. Two of the injured were pedestrians. Co-author Dr Margaret Grace said: “The burden is relatively small at the minute, but given the high numbers needing surgery, the burden on orthopaedic teams is significant and that is going to increase with their popularity.” Department of Justice figures from late last year revealed an increase in e-scooter related collisions from 3 collisions in 2018 to 37 collisions in 2020. Due to the current status of most e-scooter users in Ireland as illegal on the roads, it also raises a question around what implication that may have if they are injured in an accident.

Given the uncertainty surrounding e-vehicles, please do not hesitate to contact us for advice and guidance on this matter. If you have been prosecuted for driving an e-scooter without tax, insurance or a licence please contact our Criminal Department Team. Similarly, if you have been involved in an accident involving an e-scooter, our Civil Department Team would be happy to advise you on your options.