COVID- 19 and the Right to a Jury Trial 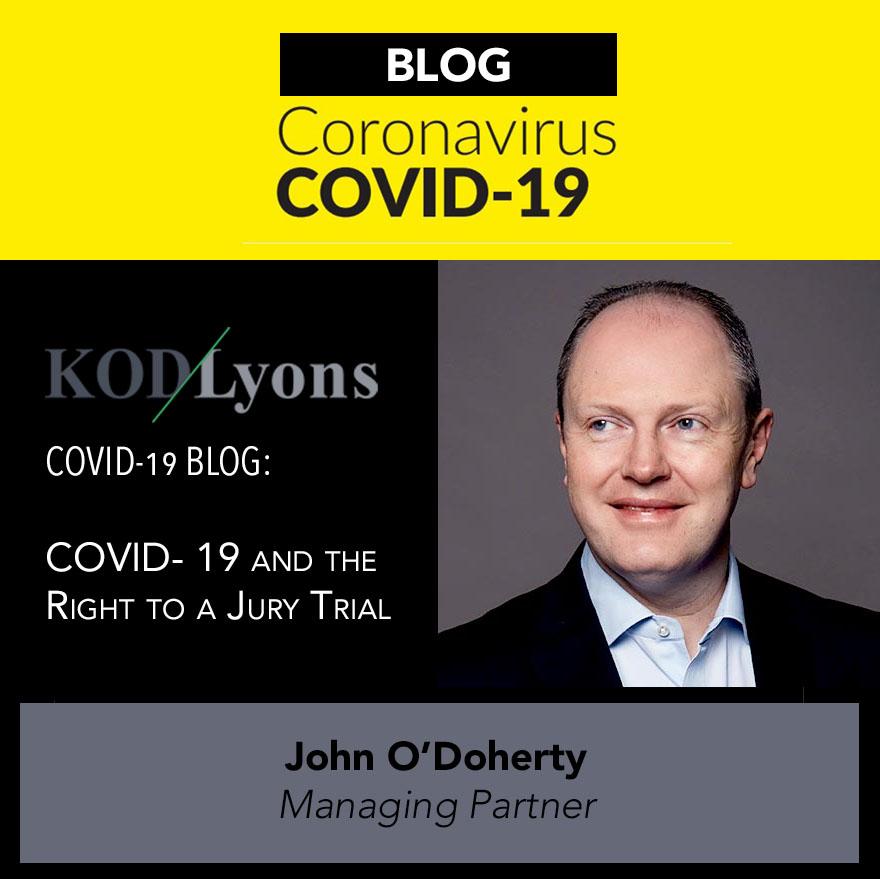 As the COVID-19 pandemic continues to hamper the operation of courts all over the country questions have arisen as to whether non-minor crimes might be tried in non-jury courts outside of the usual permissible categories in light of the restrictions imposed because of Covid-19.[1] This short blog post briefly explores the problems with seeking to restrict or remove the entitlement of a jury trial which is afforded to an accused and makes a number of short practical suggestions that should be considered by the key stakeholders.

Restrictions Imposed by Article 38.5 of the Constitution

The first question that logically must be asked is whether it is legally permissible for there to be an outright restriction on jury trials for those accused of committing non-minor offences outside of what is provided for in the Constitution.

Article 38.5 of the Constitution notes that a person may not be tried on any criminal charge without a jury save and except where:

(iii)the offence is a military offence being tried by a military tribunal.[4]

In a recent blog post Professor Tom O’Malley explores whether Article 38.5 could be interpreted as allowing persons accused of committing non-minor criminal offences to waive an entitlement to a jury trial in favour of trial by judge alone or another form of procedural arrangement.[5]

He suggests that the essential problem is how Article 38.5 is to be interpreted by the Superior Courts. If the courts were to interpret Article 38.5 an imperative, it would be most likely that it would be impermissible for an accused to essentially ‘opt-out’ of participating in a jury trial in favour of a judge only trial. However, if the court were to interpret the provisions of Article 38.5 as a right this may possibly allow an accused to waive their entitlement to a jury trial in favour of a judge only trial.[6] It is clear that in the absence of clarification from the Superior Courts any incursion into the protections afforded by Article 38.5, whether by legislation, ministerial order or practise direction would be extremely vulnerable to challenge.

Even assuming that it would be constitutionally permissible for an accused to exercise such a waiver, there would still be a number of practical difficulties to be considered. For a waiver to be considered valid, the informed and voluntary consent of an accused would be required. It is dangerous to assume that the majority of individuals accused of committing a non-minor criminal offence would voluntarily waive a key procedural safeguard of a jury trial. It is also impossible to envisage how any legislation could mandate an accused to participate in a non-jury trial without their informed and voluntarily consent given the wording of Article 38.5 regardless of whether it is viewed as an imperative or a right.

If jury trials in their current format have to be delayed for substantial periods due to the practical constraints of COVID-19 and cannot proceed on the basis of the protections afforded to an accused pursuant to Article 38.5, it is likely that individuals will seek to have their trials restrained altogether on the basis that they have been denied their constitutional entitlement to a jury trial with reasonable expedition. This is clearly not a desirable situation.

It is incumbent on all key stakeholders to identify more proportionate and better long-term solutions that had due regard to prevailing public health advice in relation to social distancing while also adhering to rules surrounding public access to justice.

Such measures could include physical sizes of juries or jurors to be empanelled at any given time, physically reducing the amount of operational courts to ensure social distancing can be adhered to or by providing remote access to court proceedings.