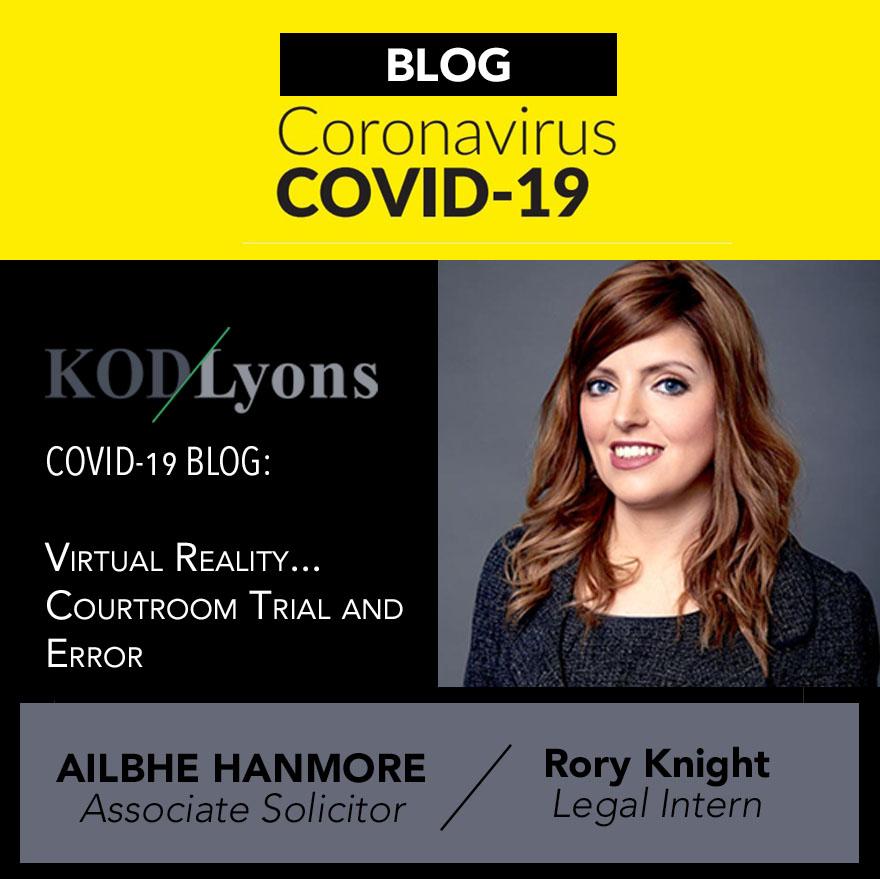 COVID-19 has led to a near shutdown of the Courts with only ongoing criminal trials and urgent matters being heard. This has led to a delay in the administration of justice and a congested judicial system. Virtual courtrooms were first announced in Ireland in January 2020 as part of the Court Service ten-year strategy document. Plans to modernize the Court service and develop virtual courtrooms have been accelerated in response to COVID-19 and the unprecedented levels of disruption to the Court Service and the administration of justice in this country.

On the 31st of March 2020, Chief Justice Clarke released a statement detailing contingency measures for the continuance of essential elements of the court system amidst the COVID-19 pandemic. The report included the establishment of an IT infrastructure to facilitate virtual Court hearings. [1]This announcement came just days after an English High Court trial was successfully conducted using Zoom and streamed on YouTube for the first time and as Court activity has been highly curtailed in this country. [2]

On the 20th of April 2020, following a series of remote mock trials the courts in Ireland sat with all parties being present via remote video technologies for the first time ever. Both the Supreme Court and the Court of Appeal heard matters in the presence of judges, practitioners and parties all present via video from remote locations. Journalists were allowed into an otherwise empty courtroom where they watched the judge and others taking part in proceedings on a screen.

The technology currently in use is a virtual meeting room (VMR) powered by PEXIP. Parties can join the VMR session from other video streaming services such as Zoom, Skype, Cisco Webex or Teams without the requirement that all parties use the same app.

The most significant procedural departure involves the circulation both of a ‘statement of case’ and a ‘clarification request’. Chief Justice Clarke notes that the statement of case will set out the Court’s understanding of the facts, the relevant findings of the Court, the issues which arise and the positions of both parties on the issues. Where the Court is unclear on any of those matters, clarification will be sought.[3] It is hoped that these changes will bring greater clarity to issues in advance and reduce the need for interventions from the Court for clarification purposes.

While remote sittings will suit most cases in the Supreme Court and many Court of Appeal and High Court proceedings, it will only apply to a limited number of cases in the District and Circuit Courts. As recognised in the Chief Justice’s statement, the difficult caseload of the District Court and family hearings in challenging conditions will not be compatible with a virtual courtroom setting. Likewise, Criminal and Civil trials which rely on assessing the credibility of a witness during cross-examination will still require physical courtrooms.

However, the Chief Justice’s recent statement suggests that the requirement could be satisfied by granting access to journalists who would act as the ‘eyes and ears’ of the public for the time being[4]. Thus, it seems unlikely that hearings will be broadcast on platforms such as YouTube.

The introduction of virtual courtrooms represents a seismic change for the Irish Judicial system. Ordinarily, it would involve extensive training and would gradually be phased in. Due to the unprecedented nature of this pandemic, the courts have prioritised making this service readily available with the intention of improving the service incrementally. It remains to be seen how these trials will work in practice as judges, practitioners and applicants all begin to adapt to virtual proceedings.