Leaving Cert, Lockdown and Legitimate Expectation: what will ‘plan B’ mean for public liability? 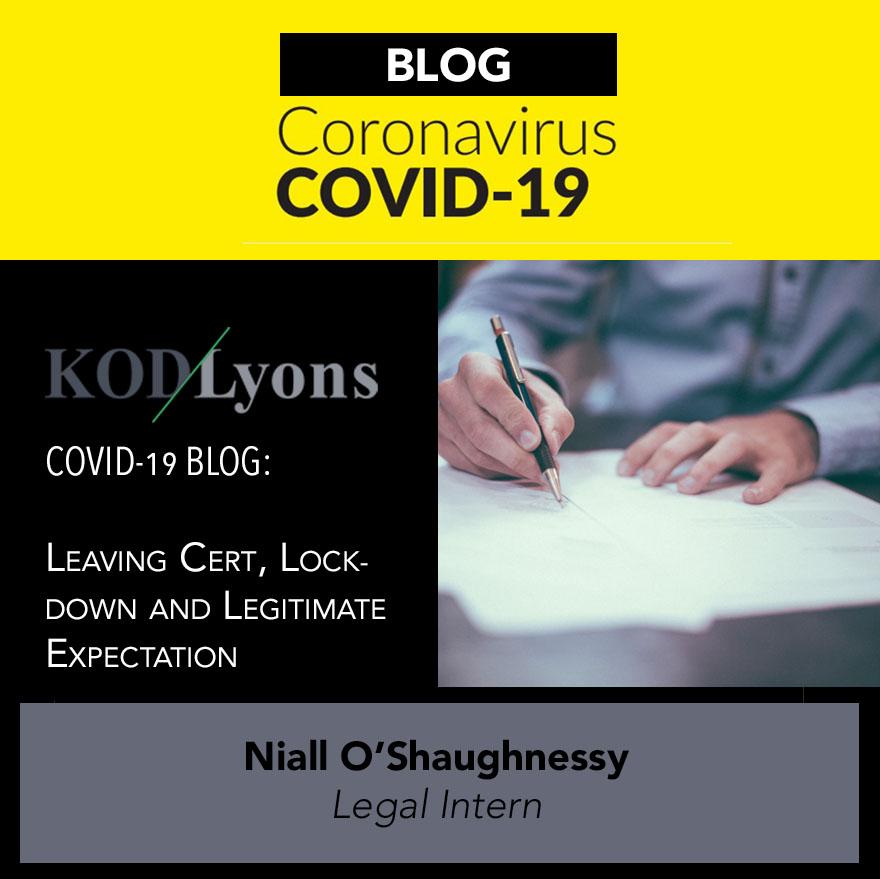 Plans to hold a set of formal Leaving Certificate exams were abandoned on 8 May with students due to be awarded ‘calculated grades’ instead. Amidst the public reaction to this development, many doomsayers are predicting that disappointed students and parents will take teachers and schools to court in their thousands. The cabinet seems to agree – it is currently legislating to indemnify schools and teachers for the costs of an unsuccessful defence. Is this just baseless hysteria or has the Department of Education really exposed itself to liability to such an extent?

The Minister for Education and Skills, Joe McHugh, has said that the government has been advised that the Leaving Cert class of 2020 has a claim in the administrative law doctrine of ‘legitimate expectation’. The expectation apparently being that students were anticipating a formal set of exams. The modern test for legitimate expectation was laid down in the UK case of Coughlan,[1] which was adopted here in Power v Minister for Social Welfare.[2] An applicant’s expectation will be enforced where a denial to do so amounts to an abuse of power. An abuse of power will be established if the applicant’s rights are affected, where the promise made to them was precise and repeated, and there is no overriding justification for denying the applicant’s claim.

The last of these requirements, the so-called public interest justification, makes establishing a successful legitimate expectation claim extremely difficult. Take the case of Curran v Minister for Education[3] for instance; here the plaintiff claimed that the withdrawal of an early retirement scheme was a frustration of her legitimate expectation. However, the State was able to justify the measure due to the fiscal pressure of the 2008 financial crisis.

The calculated grades system that has been put in place has its flaws but describing this response as an abuse of power is a stretch. If some students did pursue litigation, the State has a well-founded defence in its favour. Scrapping the usual exam arrangements is justified as grouping hundreds of students and staff together represents a huge public health risk. The case could be made that some other measure was more appropriate but that is not the test, the measure just has to be sufficiently justified.

One other avenue for aggrieved students may be the tort of misfeasance in public office. A successful claim in misfeasance entitles an applicant to damages where there has been a serious abuse of power. Although the rationale of the doctrine is similar to that of legitimate expectation – preventing abuses of power – the content of misfeasance is quite a different prospect. Proving misfeasance requires an examination of a defendant’s mental state, they must have acted illegally and known they were doing so (or been recklessly indifferent about such knowledge).

There is a huge amount of illegalities that may arise during the grade calculation process, perhaps a student is being specifically targeted based on their race or gender, or perhaps the grading teacher is no longer actually employed by the school. One important point of note, however, is that such teachers have reportedly been advised by the Department to destroy supporting documentation, which would be vital evidence in a claim of misfeasance.

This supposed advice also poses issues for teachers under the ‘right to reasons’ doctrine, which falls under the right to fair procedures. In the Supreme Court case of Mallak v Minister for Justice,[4] it was held that individuals that are the subject of administrative decisions have a right to the reasons behind that decision. The failure to provide such reasons is grounds for judicial review. The destruction of supporting documentation for teachers calculating grades may leave bona fides graders exposed. If an honest teacher decides on an accurate grade with fairness and objectivity, only to go and destroy the evidence supporting their position, their defence will be significantly compromised. The Department of Education has explained that this advice is based on the appeal process it will be putting in place, which will only examine data entries. However, this does not preclude any student from challenging their grades on judicial review after this statutory appeal has concluded.

The Department of Education’s ‘Plan B’ has rightly been the subject of much criticism – it will likely exacerbate the inequalities that the Leaving Cert system has been producing for decades. However, the warnings about the onslaught of cases being brought against the State are overstated. The doctrine of legitimate expectation, which the Department has been focused on, has a high threshold of success and the current Covid crisis gives the State an almost ironclad defence. There may be a series of claims based on the tort of misfeasance but this will only apply in extreme circumstances and so does not represent much of a threat to the public purse. However, the Department’s biggest misstep might prove to be advising teachers to destroy supporting documentation which may lead to injustices for students and educators alike.

By Niall O’Shaughnessy, Legal Intern in the Litigation and Personal Injuries Department