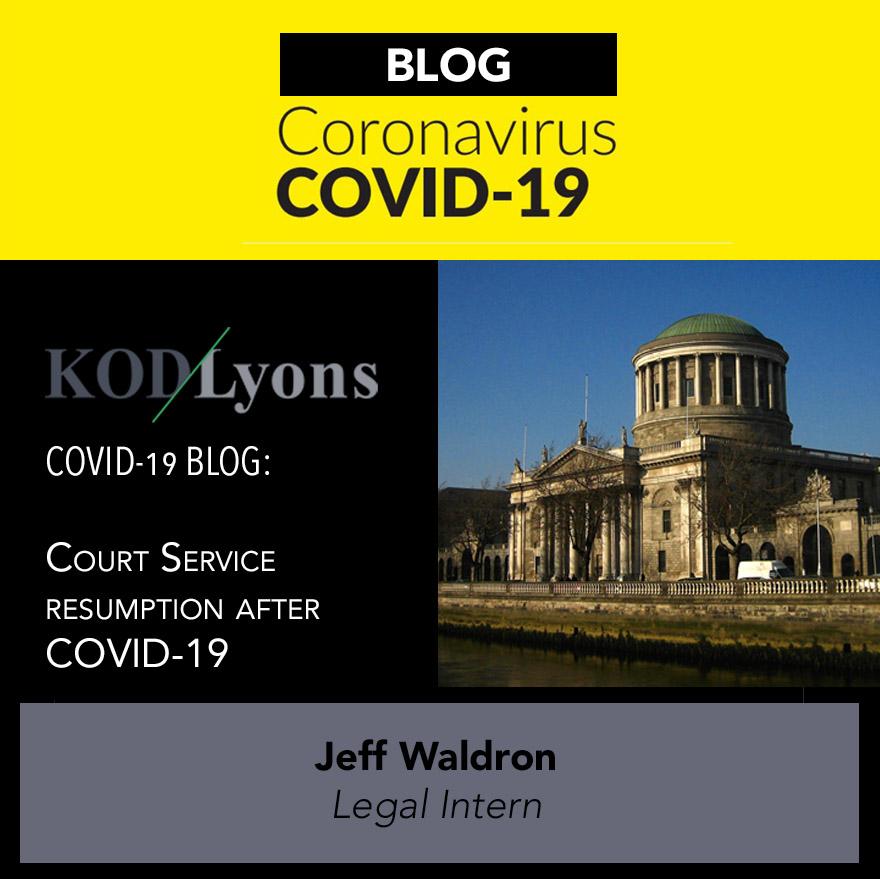 As the first phase on the ease of restrictions began to relax on May 18th, plans for how courts may gradually open are being considered. Across the country, the volume of cases before the courts has been significantly cut down, save for what is deemed as a necessary matter or an emergency application. This piece seeks to clarify the methods by which the courts can resume somewhat of a normal service across respective areas of practise.

Some plans for restoring a suitable service include the use of thermal imaging, time limits on hearings, the taking of evidence remotely and alternative venues for jury trials. [1] Safe systems of exiting and entering court houses are also being considered, such as one-way entrances and exits. Another option being considered is using every second courtroom in larger complexes to combat the potential of large crowds gathering in court complexes.

Virtual hearings in Circuit and superior courts were introduced after Easter to allow some sort of continuation of service, although it appears this is unsuitable for many High Court or Circuit matters. It appears judicial review and chancery cases would be the first to resume due to the small number usually in attendance in these types of cases.

Some legal practitioners have noted that lockdown could serve as a catalyst for the introduction of long-overdue reforms in the court system. [2] A chief concern to address in the context of remote hearings was that there can be no reduction in the quality of the plaintiff’s ability to communicate with the court. Other than that, giving evidence remotely could help ease a plaintiff’s anxiety. [3] Cases listed in the Civil District and Circuit Courts are considered non-urgent and are adjourned to later dates, with liberty to re-enter on consent or on notice to the other party.

Matters heard before the Family Courts may see a resumption of service sooner than expected. Currently, District Courts across the country are only hearing matters pertaining to emergency barring orders, but this looks to be extended to include matters such as emergency access and maintenance applications. These matters were previously adjourned to later dates rather than being dealt with immediately. In a press release on the courts service website, President of the District Court, Judge Colin Daly, announced changes for matters which can be dealt with and these include applications and hearings for breach of maintenance or access that have occurred during the emergency period or applications and hearings for temporary guardianship orders. [4]

In terms of matters listed in the Criminal Courts of Justice, District Court matters have largely been adjourned to later dates if they are considered non-urgent. Clients are asked not to attend unless the matter is urgent. In terms of Circuit Court matters, a measure currently under consideration is the use of alternative venues for jury trials as physical distancing of jurors is considered difficult in normal courtrooms. In a press release on the Courts Service website on Friday the 8th of May, it was indicated that some jury trials would resume in September.

To see somewhat of a normal service resumed for jury trials, an interesting suggestion put forward by Conor Hanly of RTE and Ronan Kennedy of NUI Galway is reducing the size of the jury and indeed the size of potential jurors called for jury service – normally, many are called for jury service to allow each party to peremptorily challenge up to seven jurors. This could possibly be abolished in the midst of the crisis. [5]

Effective progress on increased access  to the courts are welcomed, such as the roadmap currently in construction by the Bar of Ireland. Time limits on hearings, consideration of the possibility of particular witnesses giving their evidence remotely, and measures to ensure people do not congregate in courts will hopefully work well. It remains to be seen how the courts might tackle the issue of resuming jury trials in a safe manner and much depends on continuing the effort to reduce the prevalence of the virus in our community.

[1] Shane Phelan, “Plans being developed to reopen the courts as cases pile up”, Irish Independent, 8/5/20