Removal Orders and Exclusion in Light of JB v Minister for Justice and Equality [2022] IECA 89 : A Welcome Clarification? 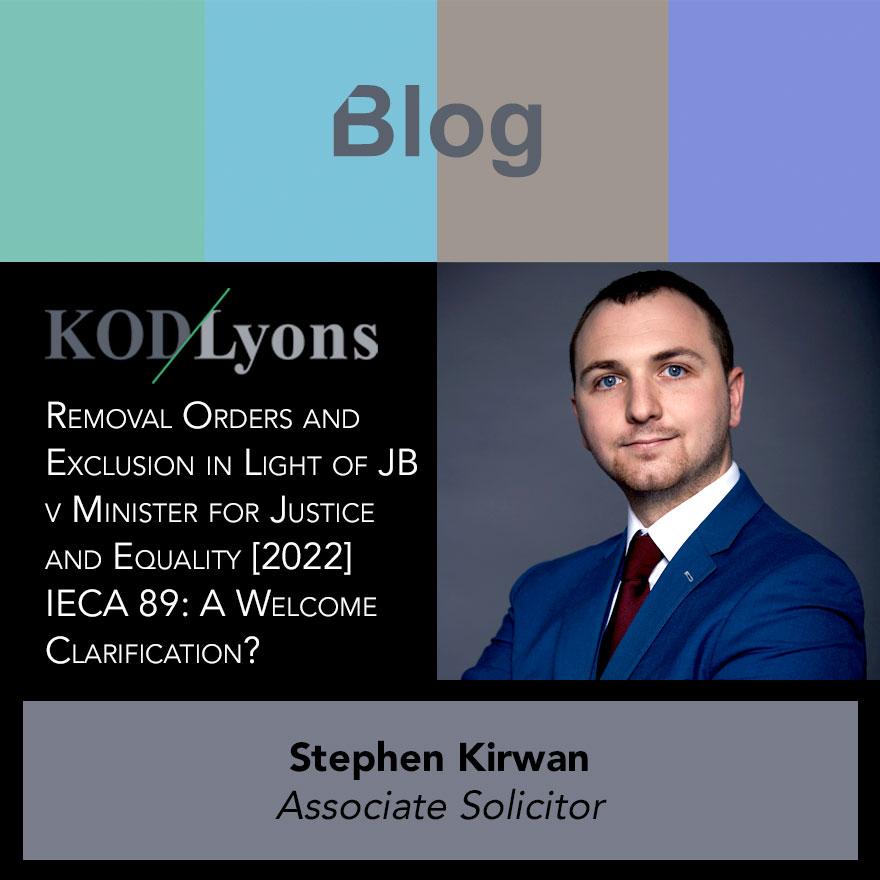 Stephen Kirwan of the Immigration and International Law team examines the recent decision of the Court of Appeal in JB v Minister for Justice [2022] IECA 89.

The decision of the Court of Appeal in JB vs Minister for Justice provides much needed to those who are the subject of the removal and exclusion order process. This brief case note seeks to summarise the standout points dealt with in the decision of Mr Justice Tony Hunt in JB.

The substantive legislative provisions which form the relevant background is the provisions of the Directive 2004\38\EC of the EU Parliament and of the Council on the right of citizens of the Union and their family members to move and reside freely within the territory of the Member States often referred to as the ‘Citizens’ Rights Directive’.

Chapter VI of the Citizens Rights Directive deals with the circumstances where restrictions can be imposed on the right of entry and right of residence of an EU citizen in another Member State on grounds of public policy, public security, or public health. More commonly this is referred to as the States rights to remove and subsequently exclude EU citizens from a particular Member State.

Article 27 (1) of the Citizens Rights Directive notes that Member States may, subject to the limitations contained in Chapter VI, restrict the freedom of movement and residence of Union citizens and their family members, irrespective of nationality, on grounds of public policy, public security, or public health.

Article 27(2) makes it clear that exclusion or removal measures taken on grounds of public policy or public security must comply with the principle of proportionality and shall be based exclusively on the personal conduct of the individual concerned.  It also makes clear that previous criminal convictions shall not in and of itself constitute grounds for exclusion or removal. Rather it obliges a Member State to evaluate on an individual basis, whether or not an individual is a genuine, present and sufficiently serious threat rather than relying on considerations of general prevention.

Article 28 of the Citizens Rights Directive provides further information about the basis on which different categories of European Union citizens may be expelled from the State. Depending on the duration of the citizen’s residence within a host state different levels of justification are required

In essence, pursuant to Article 28 of the Directive:

As part of any assessment host Member States are obliged to consider the host Member State shall take account of considerations such as how long the individual concerned has resided on its territory, his/her age, state of health, family and economic situation, social and cultural integration into the host Member State and the extent of his/her links with the country of origin.

Background timeline to the decision:

The appellant (a citizen of another European Union State) arrived in Ireland aged 24 to undertake a course and work. In August 2006 the appellant was accused of sexually assaulted another person at a party. The appellant was interviewed by An Garda Siochána and released “pending preparation of an investigation file”.

The judgment indicates that the appellant left the State with a view to undertaking and completing his studies but that at no time was it indicated that he was asked to remain in the State pending the conclusion of the investigation nor was there a suggestion that the appellant was looking to avoid the consequences of the charge.

In any event the appellant returned to Ireland voluntarily after an arrest pursuant to an European Arrest Warrant issued in August 2012 to answer charges pursuant to Section 2 Criminal Law (Rape) Act 1990. In 2013 after the appellant underwent a jury trial, Mr Justice McCarthy, after a jury trial, imposed a prison sentence of two years with six months suspended.

In 2014 a proposal to issue a removal order on the grounds that the conviction for sexual assault constituted conduct “such that it would be contrary to public policy to permit [the appellant] to remain in  the State.” In addition, the Minister proposed “to place an exclusion order preventing the appellant from entering the State for a period of up to five years from the date of [the] removal”.

Ultimately, despite representations from his legal representative a removal and exclusion order issued in 2014 by the Minster for Justice. A review was requested of this order in 2015 and this decision was re-affirmed. This decision was judicially reviewed, was settled and ultimately remitted to the Minister for re-decision.

Despite a number of interventions in the interim both on behalf of the Minster and the solicitor the Minster in 2020 re-affirmed that they were is satisfied that the appellant’s “personal conduct is such that it would be contrary to public policy not to make you subject of the following requirements”.

Mr Justice Hunt noted in considering whether or not an expulsion is justified pursuant to Articles 27 and 28 of the Citizens Rights Directive, the question for the Minister is whether the person represents  a “genuine, present and sufficiently serious threat” and that the overarching test governing the area is one of proportionality.[1]

He notes that depending on the duration of a citizen’s residence within a host state, different levels of justification are required. Mr Justice Hunt also notes that the framework of analysis for removal and expulsion orders are set out in Paragraphs 28-34 the decision of the Grand Chamber of the Court of Justice of the European Union in the PI decision.[2]

Ultimately Mr Justice Hunt identifies[3] and provides a brief narrative around the factors which the Minster maker must have regard to the following factors in deciding whether or not to issue a removal or expulsion order.

In finding against the Minster Mr Justice Hunt held that the matters raised in the judgment were not scrutinised in both the 2016 review and the High Court judgment in a proportionate manner or in some cases at all. He makes a number of interesting observations about the Minister’s failure to appropriately examine the case with reference to very specific and important factors. He notes for example:

Maintenance of Public Order and Considering in What Constitutes Serious Grounds of Public Policy:

Mr Justice Hunt examined the decision of the European Court of Justice in Calfa[4]  and the decisions of Ms Justice O’Regan of the High Court in Rola v. Minister for Justice and Equality[5] and M.S. v. Minister for Justice and Equality.[6] Those decisions concerned removal and exclusion orders which issued to Polish nationals who had permanent residence in Ireland but who pled guilty to offences of cultivating marijuana plants worth over €97,000 and received sentences of 3 years imprisonment with 1 suspended. Ms Justice O’Regan in that decision held that the Minister was entitled, as indicated in abovementioned Calfa decision that:

“…the use of drugs constitutes a danger for society such as to justify special measures
against foreign nationals who contravene its laws on drugs” , in order to maintain public
order”

Mr Justice Hunt ultimately held that the judgments were not authority for the proposition that the decision-maker may dispense with the necessity to show that regard was had to the general principles and protections against expulsion. Rather he acknowledged that a margin of appreciation can be afforded to a decision maker there was still a need to have been a proportionate assessment of risk and a reasoned engagement with the factors outlined.

The decision of Mr Justice Hunt has provided a much welcome clarification of the various principles and procedural protections which adhere to Applicants who are stuck in the removal order process. It is hoped that this decision will lead to better and more transparent decisions being made by the Minister with the rights of Applicants being appropriately considered in accordance with European Law. It also offers guidelines to Applicants as to the type of arguments they need to focus on in order to try and overturn or avoid a removal or exclusion order.

Should you be affected by a removal or exclusion order or a proposal to remove or exclude please do not hesitate to contact Stephen Kirwan of this office at stephen.kirwan@kodlyons.ie.