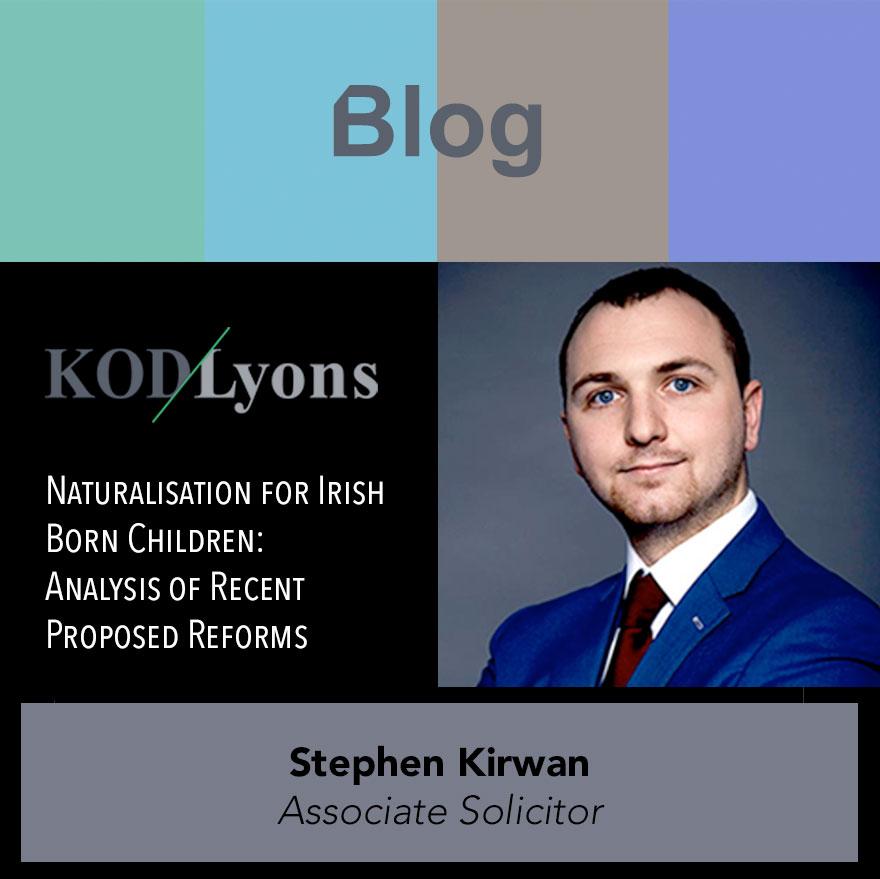 On 23rd March 2021, the Minister for Justice, Helen McEntee, announced that she will introduce measures to ensure that children born on the island of Ireland but who are not entitled to citizenship at birth to gain Irish citizenship themselves.[1]

The present policy is that categories of children born on the island of Ireland (often referred to as a ‘ius soli’ basis to citizenship) are not automatically entitled to Irish citizenship by birth. This includes:

-Children whose parents do not have three full years reckonable residence built up prior to their birth.

For those children who do not fall within these requirements the current requirement is that they (or more accurately their parents) have accrued five years reckonable residence prior to making an application and have been continuously resident in the jurisdiction in the year immediately prior to their application for naturalisation.

Minister McEntee announced that she intends to reduce the residency reckonable requirements for children born in Ireland who do not automatically qualify for citizenship by birth from five to three years.  This is clearly a welcome development which will allow children who are currently on a pathway to citizenship to attain this status at a much earlier stage.

However, it is not without some significant difficulties.

Problems and Who is Not Covered:

Despite the welcome change this has brought for some families it is submitted that the changes simply do not go far enough. However, it will not broaden the categories of children who are entitled to citizenship and this amendment will only apply to the children of those parents who are legally resident in the State.

This means that those children whose parents who are undocumented, did not have sufficient reckonable residency prior to their birth including in certain instances those who might have been in the international protection applicants, or those who are resident on ‘non-reckonable’ permission are not eligible.

In effect what this means vast numbers of children who have only known Ireland as their home will potentially continued to be excluded for the prospect of obtaining naturalisation and will remain vulnerable to potentially being deported from the jurisdiction.

It is submitted, in this writer’s view, that this is an extremely arbitrary policy choice which leads to many unjust and arbitrary results particularly in circumstances where those automatically entitled to Irish citizenship by descent or blood (known as a ‘jus sanguinis’ basis) without having any prior residence or affinity to the island of Ireland which runs into the millions.[2]

Opponents to broadening the categories of eligibility for minor children often cite Article 9.3 of the Irish Constitution, a change which was introduced by way of referendum in 2004, as impeding the Minister’s ability to widen the right to citizenship by bright on a purely ‘ius soli’ basis. There is no such impediment contained in the text of Article 9.3:

“Notwithstanding any other provision of this Constitution, a person born in the island of Ireland, which includes its islands and seas, who does not have, at the time of the birth of that person, at least one parent who is an Irish citizen or entitled to be an Irish citizen is not entitled to Irish citizenship or nationality, unless provided for by law.” [emphasis added]

That final clause “unless provided for by law” enables or empowers the Oireachtas to legislate for citizenship entitlements up to and including citizenship by virtue of birthplace or ius soli citizenship and thus it is clear that any restrictions are purely based on prevailing Ministerial policy.

While it appears that opposition legislation on the issue will unlikely be considered in light of the above statement[3] it is hoped that more progressive legislation will be introduced to address an anonomoly which potentially leaves thousands of very vulnerable minors “in limbo”.

Should you be affected by the above please do not hesitate to contact Stephen Kirwan of this office at stephen.kirwan@kodlyons.ie or at 01-6790780.

[2] Are you of Irish descent? Now is the time to get your Irish Citizenship (irishcentral.com)