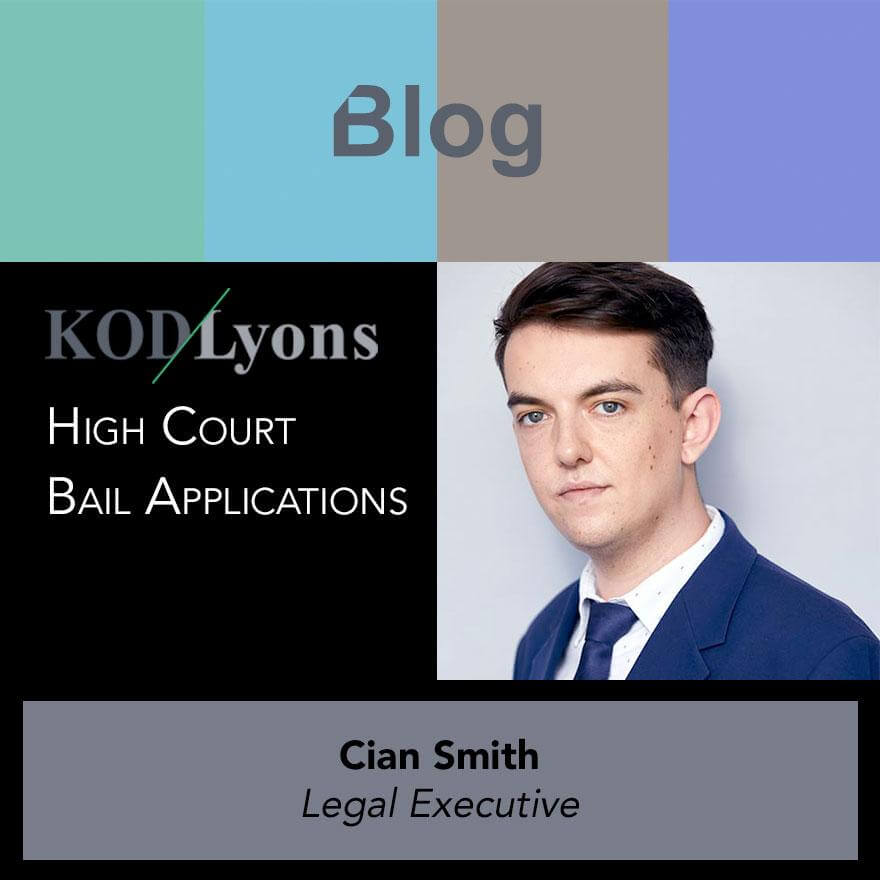 Coming out of this unprecedented pandemic, normality is finally returning to the legal system in Ireland.

High Court Bail Lists are now operating at their pre COVID-19 capacity, and here at KOD Lyons we make such Bail applications daily.

If an individual is refused bail in the District Court or Circuit Court, for whatever reason, the next port of call to apply for bail is the High Court, which has de novo jurisdiction to hear applications after a refusal of bail in the lower courts.

High Court Bail applications are made by way of a High Court Affidavit, sworn by the Applicant. The Affidavit contains information such as the Applicant’s name, address, details of the refusal of bail in the lower court, particulars of the offences, as well as conditions an Applicant is willing to abide by if granted bail by the High Court Judge.

If an Applicant is charged with crimes such as murder, attempted murder or piracy, the District and Circuit Courts do not have the power to grant bail, and such bail applications relating to those offences must be heard in the High Court.  With certain offences under the Offences Against the State Act 1939, bail applications must also be made directly to the High Court.

Once the Affidavit is lodged in the Central Office, located in the Four Courts Dublin, the matter is listed in the High Court. Solicitors then brief counsel, who make the application by way of additional oral submissions to the Court, which involve cross-examination of the prosecuting guard and advocating to the Court that the Applicant will meet conditions set by the High Court, not commit any further offences and keep the peace, and attend future Court date relating to the charges.

The prosecution may object on the basis that the Applicant has absconded in the past, i.e. failed to appear before a Court after been granting bail or interference with witnesses (this probability test is set out in DPP v O’Callaghan), or the Applicant has committed offences whilst on bail in the past (scheduled offences set out under Section 2 of the Bail Act, 1997). Counsel and practitioners will also speak to the Prosecution before a hearing in an attempt to seek consent for Bail with terms attached, such as curfews, signing on at a local Garda Station or a lodgement of cash bail.

The only Court in Ireland that hears High Court Bail Applications is located in Cloverhill High Court, located beside Cloverhill Prison on the Cloverhill Road in Clondalkin, Dublin 22.

Once a person is remanded in custody and instructs they wish to seek High Court Bail, here at KOD Lyons we prepare the Application, visit the Applicant in prison to swear said Affidavit, and lodge in the High Court Central Office, for the application to be listed the following week, in a timely and efficient manner.

The morning of the bail hearing, practitioners have a consultation with their client via phone, which has recently become a sped-up process with the introduction of new phone lines within prisons such as Cloverhill. While much of the delays in the High Court Bail list have bene mitigated in 2022, there is still an average of three to four weeks wait time for Applications to be heard.

As a Dublin based firm familiar with the High Court Bail process, KOD Lyons Solicitors are available to make High Court Bail Applications for practitioners outside of the Dublin area, due to our proximity to the Four Courts and Cloverhill High Court, and our experience in this area.

If there are any questions or requires in relation to High Court Bails, please contact Cian Smith of this office at cian.smith@kodlyons.ie or by way of phone on 01-679 0780.