Covid Suspension of Civil Liberties – How worried should we be? 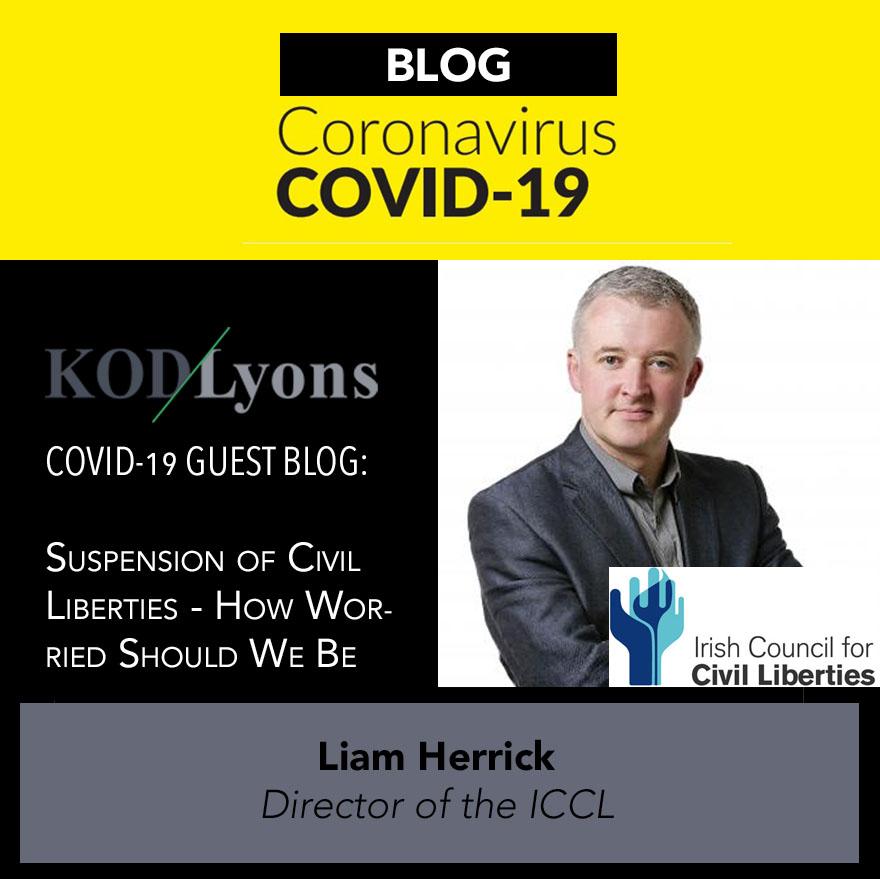 Guest BLOG by Liam Herrick, Director of the Irish Council for Civil Liberties

Covid Suspension of Civil Liberties – How worried should we be?

We are in extraordinary times. Over just a few short weeks, normal life has been suspended, schools and businesses have closed, public events have been cancelled. At the centre of this crisis is a disease that has killed hundreds of people in Ireland and hundreds of thousands globally, and it was clear early on that – for the first time in living memory – drastic action would be needed to restrict transmission.

There has been an incredible support for a science-based, public health effort based on severe restrictions on human contact. However, the translation of public health policy to legal restrictions and police enforcement has been a key stage in the process, and this is the point where science gives way to social, economic and legal considerations. ICCL has been closely watching the legal steps taken to ensure the greatest possible protection of human rights during the pandemic, and the quickest possible return of our basic freedoms.

The Government’s approach has had three key elements – legislation, regulation, and public health advice. The first step was the creation of broad Ministerial powers under the Health (Preservation and Protection and Other Emergency Measures in the Public Interest) Act 2020, rushed through the Oireachtas on 19-20 March. This Act amended the Health Act 1947. The Act gives the Minister power to restrict (by regulations) movement and events. The Act also created a special power to detain contagious persons.

The Irish Constitution only provides for an emergency during war or armed rebellion, but this legislation has all of the attributes of a state of emergency or martial law – albeit with it the formal suspension of constitutional rights. Crucially, the first draft of the law would have given the Government power to determine how long that emergency lasted by giving the Ministers for Health and Public Expenditure the power to extend the period. ICCL campaigned for a sunset clause to be included, whereby any extension would need Oireachtas approval – we succeeded and now the powers to detain and make regulations on movement and events will expire on 9 November.

Interestingly, after pushing through legislative powers as a matter of urgency, Government then failed to introduce regulations for over two weeks. Essentially they retained faith in policing by consent, and the Garda mounted a major community policing operation over the weekend of 27-29 March based on advice and guidance to the public about a set of public health advice issued on 27 March – the first orders about physical distancing and essential work and retail outlets.

Regulations eventually came on 8 April with Garda powers of arrest, and sanctions up to imprisonment – but with a duration of only 5 days to cover the Easter Bank Holiday and to run to the end of the period set out in the public health advice of 27 March. The logic for the move from consent to enforcement was that the Garda needed legal certainty to underpin a large Bank Holiday Operation (Operation Fanacht) – the circumstance of how the Government went from consent to enforcement are somewhat unclear.

At that point ICCL called for a review of the use of those regulations before any further steps, but unfortunately when the next (current) public health advice issued on 11 April to last until 5 May, the Government simply rolled over the Regulations and Garda powers with no changes, and for the full period. It could have tweaked the content, or chosen a shorter period to allow for analysis of how the Garda powers were applied in the first five day spell, but this was an opportunity missed – I suspect mainly due to administrative capacity. The rolling over was cleaner and easier, but has the effect of extending a five day Garda operation into a four week one.

All the while the Garda Commissioner has consistently emphasized that the Garda are intent on using the powers sparingly, and taking an approach based on encouraging compliance. As a step towards reassuring the public on this point, the Commissioner has issued weekly statistics which show a low level of arrests under the public health regulations. While overall the policing approach seems to be moderate, ICCL has received a significant number of calls from members of the public about overtly zealous application of the regulations, and on issues such as the presence of armed gardaí at checkpoints. This week we had some worrying signs of a heavy handed approach to protesting workers for example. We are in close contact with the Policing Authority on all, of these issues.

The key for ICCL is that we protect rights as much as possible during the emergency, and also ensure that emergency policing does not become normalized. Public trust and consent is a two-way street – if Government is invoking extraordinary powers, it must explain every step of what it is doing and it must demonstrate that it is taking all possible steps to ensure that every measure is necessary and proportionate.

In that regard the next week will be crucial. The current public health advice expires on 5 May, as do the current regulations. The Taoiseach has said that the Government is coming up with a plan to review and possibly relax so of the restrictions before that date. ICCL, along with civil society colleagues, has written to the Taoiseach saying that it is imperative that a Human Rights Impact Assessment be carried out now to identify if certain groups are being disproportionately impact by the virus or by the restrictions, and to see if more proportionate and targeted measures can be used to continue the public health effort. Some of those groups include Travellers, Roma, asylum seeker, homeless families, people suffering from mental illness, children with disabilities, and victims of domestic violence.

We know that scientific and economic considerations will shape the next Government but the public need to know that our rights are being properly taken into account as well. It is the least we can expect.

If you want to keep up to date with all of ICCL’s work on Covid, you can sign up for updates at www.iccl.ie