“The Notorious RBG” – Incorporating the Female Perspective into the Legal System 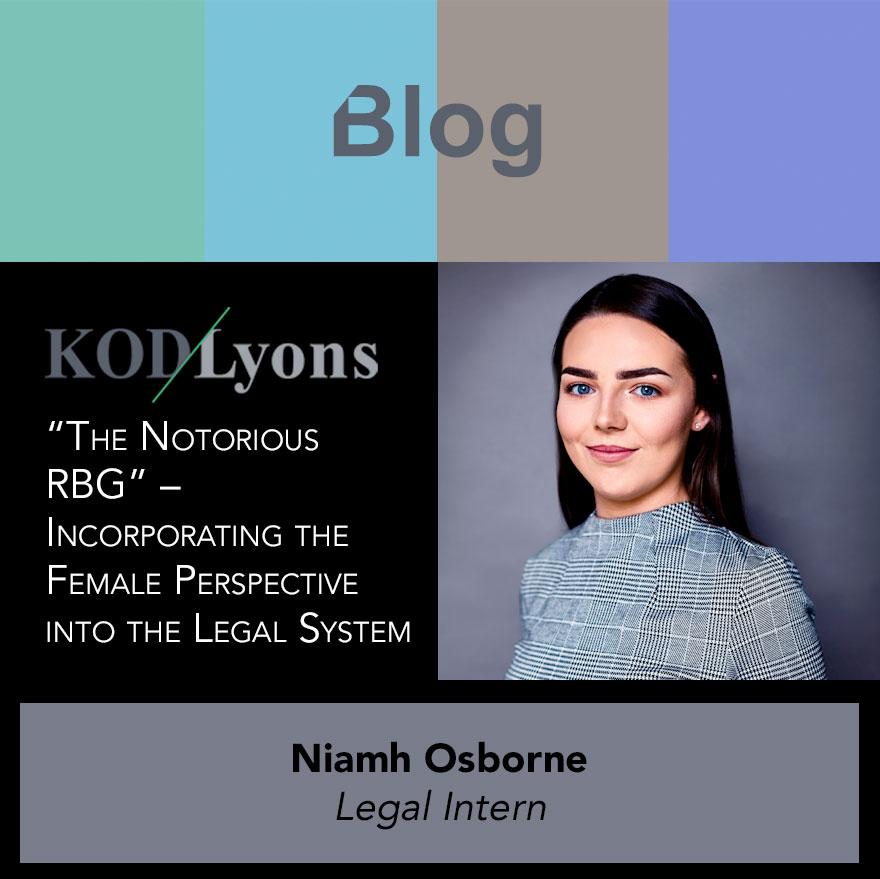 The 18th of September 2021 marked one year since the death of US Supreme Court Justice Ruth Bader Ginsberg. Throughout her career on the bench of the US Supreme Court, Ms. Justice Bader Ginsburg became a cultural icon (often referred to as “The Notorious RBG”) and a stalwart in the legal world for her strong rights-based approach and fearless dissents. Her influence has been seen and heard across the globe. Upon reflection in the year since her passing, Ms. Justice Bader Ginburg’s remarkable judgments and brazen defiance of her colleagues’ uniformity provides a stark example of the importance of the incorporation of the female perspective in the legal sphere. Traditionally, women have been excluded from the law, both as adjudicators and subjects. Powerhouses like Ms. Justice Bader Ginsburg, and indeed the likes of our own Ms. Justices Denham, Dunne, O’Malley, Baker and Irvine to name a few, challenge and upset this status quo, paving the way for a more just and equitable society.

Looking at women as adjudicators in an Irish context, in the 2005 Bar Review Carroll outlined the average profile of an Irish judge of the Superior Courts. It was revealed that the typical Irish judge in 2004 was an ethnically Irish, middle class, privately educated man from Dublin who described himself as liberal but didn’t believe there is room for ideology in the Courts.[1] This is reflected in the composition of the Irish Courts, with only 63 out of 167 judges being female as of January 2020.[2] Women make up over 50% of the population and are clearly disproportionately represented on in the Courts. As a result of this, the female voice and perspective is not heard as loudly as it ought to be.

The experience of the female judge has been explored by L’Heureux-Dube, who describes it as being expected to take their place on the bench, suppress their experiences and speak softly.[3] This is in tandem with the writings of Erika Rackley, who compares the female judge to Hans Christian Anderson’s Little Mermaid. She notes that in order to achieve partial acceptance in the legal world, like the Little Mermaid, the female judge must trade her voice[4] and there are uncomfortable similarities between the Little Mermaid’s self-mutilation and difference and the story of the woman judge.[5] In addition to this, Rackley attributes the lack of female representation in the Courts to the hostile nature of legal culture and the view of women as exotic and dangerous outsiders.[6]

Catherine McKinnon questioned in 1991, why do women have to conform to the standards set by white men to obtain what they have when white men do not have to conform to anything but each other?[7] When we examine women as subjects of the law, it is obvious that women have historically had to conform to laws set by men, for men. Aristotle, the father of natural law, once stated that ‘we must look upon the female character as being a sort of natural deficiency’.[8] Under the Blackstone Commentaries, women couldn’t own property, sign legal documents, enter into a contract or obtain an education without her husband’s consent. Marital rape was legal in Ireland until 1990.[9] Feminism can be a useful tool to campaign for the introduction of laws that are reflective of the female experience. This is still relevant today as we have recently seen the implementation of the Harassment, Harmful Communications and Related Offences Act 2020, which criminalises the possession and distribution of intimate images online. This came to pass following widespread feminist campaigning online. This is demonstrative of Clare McGlynn’s assertion that women have the ability to make a difference and enrich the content of law by using their distinct experiences and perspectives.[10] This new Act demonstrates that feminism is still instrumental in the introduction of laws that incorporate the female experience.

Echoing the sentiment of Ms Justice Bader Ginsburg – women belong in all places where decisions are being made. Women bring a nuanced plethora of experience to all facets of life and society, lest not the legal system. This has been seen through the judgments of Ruth Bader Ginsburg and the remarkable women sitting in the Irish Courts. The inclusion of the female perspective in our legal system has progressed in leaps and bounds in recent decades, but we still have a long way to go before true equality can be achieved within our legal system.

[8] Aristotle, ‘The Generation of Animals’.