Sub Judice…… why you should be careful when you click “send”! 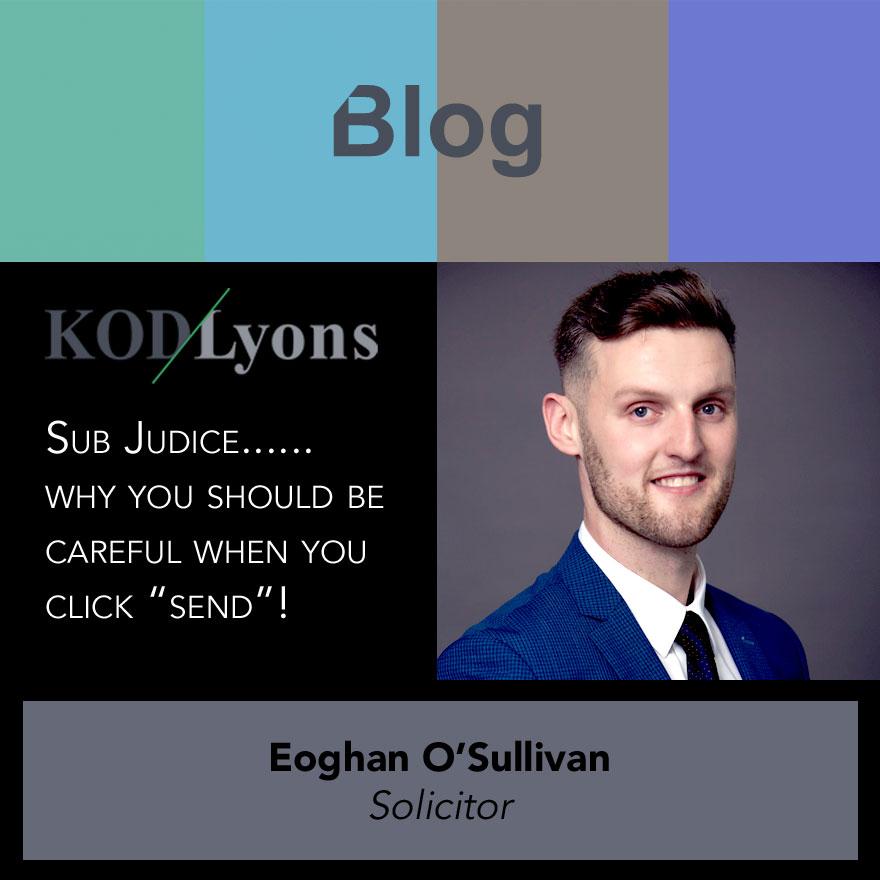 We live in a world where the power and the reach of social media can not be underestimated. Everyone, from very young to very old, has access to platforms in which they can connect with friends, join groups of people with similar interest, promote businesses and share stories. However, they can also be used to voice strongly held opinions and vent frustrations about what is going on in society.

There has been a lot of online commentary in relation to the recent tragic and awful circumstances around the killing of Aisling Murphy. Some of this commentary has been in relation to persons arrested and an individual who has been charged in relation to her murder in Tullamore District Court. Unfortunately, this type of commentary online can a negative affect on the judicial proceedings and could have the potential to prejudice or jeopardise these proceedings in breaching an accused’s right to a fair trial. Commenting online on this case could breach the Sub Judice rule, and those commenting may find themselves in contempt of court and subject to their own penalties or prosecutions.

Sub Judice is defined as “before a court of law or judge, under judicial consideration”. It is a Latin phrase which literally means “under a Judge”. As a matter is under judicial consideration it should therefore be prohibited from public discussion elsewhere. Matters are considered Sub Judice once legal proceedings become active. Criminal Proceedings are deemed active once a person has been arrested and/or charged with an offence and remain active up until the conclusion of the case. Public or media commentary which may be seen as prejudicial to the trial of an accused could have a negative consequence on its proceedings.

An example of this was very recently seen in a circuit court case in Limerick in which the DPP brought an application to have the trial of these proceedings moved from Limerick to Dublin on foot of its concerns about Jury selection and the extensive media reportage of the case. The DPP had a fear of a risk to an impartial jury panel if the matter were to remain in Limerick Circuit Court.

If a person were to post or publish content which could be prejudicial to the proper and fair conduct of a criminal trial that person may be held to account and found to be in contempt of court. Contempt of court remains on a common law footing rather than enshrined in legislation and criminal contempt is used by the courts to protect their operation, for example, by punishing people who disrupt the court when it is sitting, or protecting the integrity of criminal trials by, for example, preventing people from interfering with them by unlawfully publishing information about them.

As it stands the penalties in Ireland for contempt of court is up to 7 days imprisonment and a fine. Legislation has been brought in in other jurisdictions, such as the UK where if someone was found to be in contempt of court they would be liable to a fine and/or up to two years imprisonment. In the UK, they legislated for contempt of court with The Contempt of Court Act 1981 which states that publishing information that creates a substantial risk of serious prejudice or impediment to any active proceedings can be contempt of court. The Act applies to information shared through newspapers and on television and radio. It also applies to information shared in posts on social media either by the media or members of the public. This means that once somebody has been arrested, it is important to think very carefully about what is shared online and ensure that care is taken not to share information that could prejudice or impede those proceedings.

The courts are taking any breaches of court orders, or harmful material being published online in relation to active criminal trials very seriously and that is evident through the prosecutions brought against a number of people who published images and details of Boy A and Boy B from the Anastasia Kriegel case despite a court order in place and it being a seperate offence to do so under the Childrens Act 2001.
Some advice to be considered before a person would post anything on social media in relation to an active criminal trial;

If you require any further information in relation to this post, please do not hesitate to contact me at eoghan.osullivan@kodlyons.ie.