Spit Hoods – Who is Guarding the Guardians? 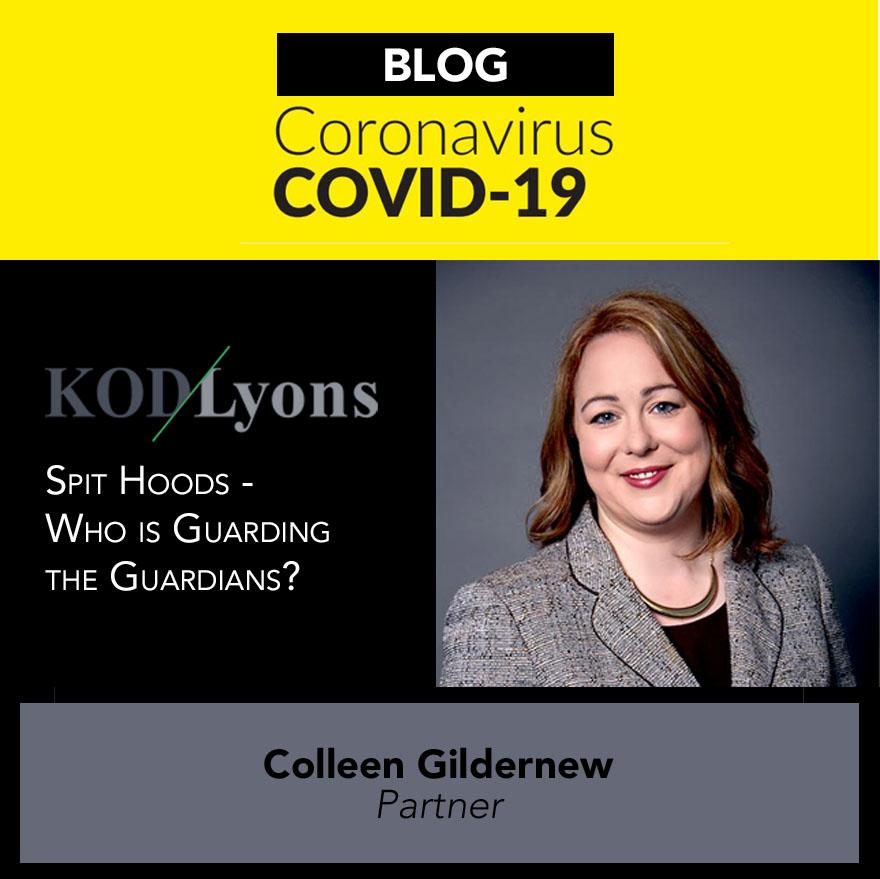 In these strange days of working from home, lay-offs, and social distancing, we may find ourselves turning to the media more than ever for information. In recent weeks, you could put on the ‘Six One News’ and be forgiven for thinking you had accidentally tuned in to some strange Dystopian film, such is the unfamiliarity and bizarreness of the subject matter.

A worrying trend that has emerged in this new COVID-crisis era is the seeming willingness of some commentators to call for the State to ignore human rights considerations. For example, one of the contributors on RTÉ Radio on Sunday 29th March suggested that we should ‘park’ human rights for the duration of the corona virus exigency. Other debates have centred around whether bail should be refused in cases where defendants are accused of coughing or spitting at people. Such an argument has no basis whatsoever in law, and highlights the ignorance and hyperbole that can sadly emerge in times of crisis.

It is of course one thing for debates to be aired on the media, however unpalatable the subject matter; and another thing entirely for the State to act in a way which would seem to be at odds with human rights concerns. On 26th March 2020, the news broke that An Garda Síochána (AGS) had ordered 16,000 ‘spit hoods’. These hoods are devices intended to cover the mouth, face and sometimes the head of a restrained person. They are made of fabric and mesh and forcibly put over a person’s head in order to prevent them spitting at, or biting others.

Spit hoods have been widely condemned by human rights organisations. Amnesty International have said that some models of spit hood are little more than a ‘glorified sack’ which restrict breathing and can cause extreme distress. Liberty have described them as ‘primitive, cruel and degrading’.

The Irish Council for Civil Liberties reacted immediately to the news of An Garda Síochána’s order of the hoods by describing them as ‘degrading and unnecessary’, and pointed out that they can actually lead to higher incidents of assaults on police. That practical concern would seem to be one that was previously shared by the Met Police in London, as Police Commissioner Cressida Dick had expressed concerns that the use of spit hoods could make it more likely that police could get a ‘good kicking’. Until February 2019, spit hoods were only used by the Met in custody suites, and not in public, due at least in part to the potential public perception of police brutality. The decision to roll them out to police on the beat came after what Scotland Yard described as a ‘careful consultation’.

It seems that An Garda Síochána has not engaged in a similar consultation, nor thought through any of the concerns flagged up by human rights organisations, nor sought to consult with any interested parties before going public with their order. There would not appear to have been a debate or even a mere mention of spit hoods in the Dáil.

Minister for Justice and Equality, Charlie Flanagan, was questioned about the controversial hoods on RTÉ Radio, ‘Today with Sean O’Rourke’ on 1st April 2020. Minister Flanagan acknowledged that the spit hoods had been criticised by the ICCL, but said that his ‘expert’ in this matter was Garda Commissioner Drew Harris, and that he was accepting his (Harris’) advice. Now it is all very well for a Minister for Justice to listen to the views of the Garda Commissioner, but surely there should be some sort of properly reasoned debate and impartial advice before the adoption of something which has attracted such vehement criticism from human rights groups. One would have been forgiven for thinking that you had tuned into a radio show April Fool’s prank rather a critical analysis of the use of such controversial measures.

It seems suspiciously expedient to say the least, that An Garda Síochána would react so quickly to the corona virus crisis by ordering equipment such as spit hoods. One wonders exactly when the use of spit hoods was first discussed within AGS, and whether the order of 16,000 hoods was a reaction to the crisis, or merely an opportune time to announce it. The sheer number ordered seems somewhat over-the-top, given that there will be more spit hoods than there will be serving AGS Members. The disparity with the number of hoods seems somewhat out of kilter. Surely AGS don’t anticipate using spit hoods on every single person with COVID-19? It is especially strange as AGS were careful to describe the use of spit hoods as merely a ‘temporary measure’ to be used during the current outbreak. It would seem to be something of a case of AGS using a sledgehammer to crack a nut.

The language used by An Garda Síochána would also seem to be expedient, manipulative and even potentially misleading. The press statement announcing the procurement described how the management had considered ‘various forms of additional PPE’. The use of PPE, or Personal Protective Equipment, has been one of the major talking points of the COVID-crisis. However, PPE, by its very definition, is personal to the wearer; who in this context would be a Garda. A spit hood cannot logically be described as an individual Garda’s PPE, as it is placed on another person (i.e. the person being restrained) rather than being worn by the Garda.

Now of course the vast majority of us, when hearing about people deliberately coughing or spitting at passers-by, will react emotively and with entirely understandable anger and disgust. However, that is not a reason to suspend our human rights considerations, or to park respect for civil liberties. AGS’s reaction to the pandemic must be measured, proportionate and reasonable; and conform to international human rights standards. The use of spit hoods is none of the above. The Roman poet Juvenal asked ‘Quis custodiet Ipsos custodes? Who will guard the guardians?’.