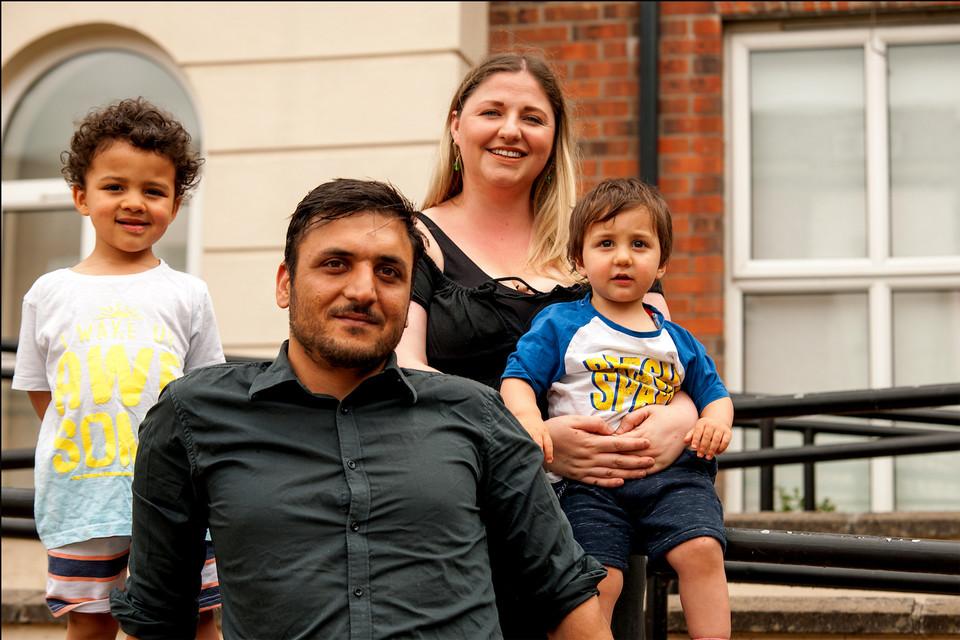 Counting 2020 – when the possibility of international travel withered with the global Covid-19 restrictions – it means their two small boys won’t see their grandparents in Jordan for more than two years, says Ní Shuilleabháin.

As Alheajneh understands it, a trip to Jordan, where he is from, would violate the continuous-residence requirement for citizenship. “It has to be unbroken, one year, 365 days before applying,” he says.

The wording on the government’s website can be read that way. And for a short while in 2019, a court ruling meant that was the case.

But in November of that same year, another court ruling confirmed that people don’t have to have their feet on Irish soil for all 365 days in the year before they apply for citizenship, and can travel a little.

Despite the requirement that the law requires citizenship applicants’ year before applying to be one of “continuous residence”, “it has long been recognised that many people may travel abroad for a holiday, or may have some unexpected or unavoidable reason to travel abroad”, says a spokesperson for the Department of Justice.

“A period of up to six weeks for travel purposes outside of the State is currently permitted without impacting on the citizenship application,” says the spokesperson.

New legislation is in the works that would outline clearly how long somebody can travel for in that year, the spokesperson said.

Then, instead of being “understood”, it would be written into the law – and presumably in guidance for applicants on the website and elsewhere.

In the meantime, the lack of clear accessible guidelines leaves uncertainty for applicants, says Stephen Kirwan, an associate solicitor at the law firm KOD Lyons. “I think it’s a lack of communication, and I don’t know why.”

“Are they trying to make the rules and the website so inaccessible and so hard-to-read that it’s excluding people or forcing people who don’t have the money to seek legal help?” he says. “Possibly.”

Ní Shuilleabháin says that she and her husband didn’t know that up to six weeks was okay.

They’d read cautionary tales on social-media groups from fearful applicants avoiding travel to satisfy the requirement, and from those who said they got into trouble even with short-term trips, says Ní Shuilleabháin.

“I was in a group before where an American woman was in the same predicament as us with this situation and was distraught as her mother was dying and she was near the end of the year,” she says.

The confusion arises partly from the back-and-forth over a court case around the meaning of “continuous residence”.

The country’s immigrant communities may have heard about the case, Jones v. Minister for Justice. Ní Shuilleabháin says she knew it was about an Australian man who had applied for citizenship.

“But he wasn’t in the country enough to be applying for citizenship, and because of that, they didn’t give it to him, and he took them to court,” she says.

The outcome of that case shapes their understanding of the continuous-residence requirement, she says.

Jones was out of the country for 97 days on a holiday break and three days for work in the year before applying.

He believed that the Minister for Justice was interpreting the notion of “continuous residence” outlined in Section 15 of the Irish Nationality and Citizenship Act 1956, too literally, leaving little room for reasonable absence.

But the judge said the minister was doing the exact opposite by giving a six-week discretionary holiday allowance to would-be citizens.

“Either an applicant ‘has had a period of one year’s continuous residence’ or he has not,” the judgment says.

Dismissing Jones’s case, Justice Max Barrett said that to comply with the law, the minister should follow the definition of “continuous” as spelt out in the Oxford dictionary. That is “unbroken, uninterrupted, connected throughout in space or time”.

“He said, look, it may be unfair, but it’s up to the Oíreachtas to change the legislation,” says Kirwan, the solicitor at the law firm KOD Lyons.

Because of the ruling, the government stopped processing citizenship applications for six months in 2019 until a court of appeal judge overturned the decision. She said interpreting the word “continuous” too literally was “unworkable”, “unduly rigid”, and was bound to lead to “an absurdity”.

The judge said the Minister was pragmatic and fair in giving would-be citizens a holiday break. However, the appeals court upheld Justice Barrett’s decision that Jones was not entitled to citizenship.

Despite that outcome, people like Ní Shuilleabháin and Alheajneh remain uncertain of the rules – and determined to avoid travel to guarantee an unbroken stay.

“If someone gets sick and we have to go, it’s a reset and doing it all over again,” says Alheajneh.

Off the back of the court case, the Department of Justice has proposed amendments to the Citizenship Act 1956.

It aims to reform the law to allow up to 70 days of overseas holiday breaks under normal circumstances for would-be citizens, said a Department of Justice spokesperson.

“The proposed amendments would also see an additional period of up to 30 days allowed due to exceptional circumstances,” the spokesperson said.

Kirwan, the associate solicitor at the law firm KOD Lyons, says in cases of emergency travel, the proposed changes still fail to empathise with the urgency of some real-life situations.

“It doesn’t go far enough while it introduces a degree of flexibility,” says Kirwan. It’s wrong to put a limit on how long someone can stay at the bedside of an ill loved one, he says.

“My point is, what happens if you go home to visit your sick mother, right? And you’re ten or 15 days over that?” says Kirwan.

“I’m thinking of people who have to travel to America or to Pakistan or to India or Japan. These places are not exactly next door,” he says.

There should be general discretion and the minister should take it case-by-case for emergencies, he says. “It’s disingenuous to cap that.”

Even for those who avoid travel altogether, it can be challenging to convince the Department of Justice that they were here in Ireland.

A client of Wendy Lyon, a solicitor at the firm Abbey Law, recently got a letter from the department with instructions to provide evidence of in-person shopping transactions for the years 2016 to 2021 as proof of continuous residence.

Says Lyon: “While it seems unlikely that anyone would be refused naturalisation for inability to provide this documentation – and any such refusal would be legally dubious anyway – even the fact that so much evidence has been requested is concerning.”

“The refusal to accept evidence of online shopping seems particularly bizarre after a year in which people have been forced to do most of their shopping online,” she says.

A recent report from the Economic and Social Research Institute said that “Failure to satisfy the ‘good character’ requirement, inability to meet the residence criteria and marriages of convenience are among the top reasons for refusal of a naturalisation application.”

Applicants must show three different types of evidence that they have lived in Ireland for every year they say they have been here on an immigration stamp that counts toward citizenship.

These pieces of evidence can be bank statements, mortgage statements for homeowners, utility bills, rental agreements or even proof of attending a medical appointment.

Lok-Hang Lam, who applied for citizenship in April 2020, says she struggled to provide three different forms of evidence, even though she has lived in Ireland for about 20 years. She wasn’t holding onto supermarket receipts either, she says.

“I sent them bank statements, payslips. Utility bills? I didn’t have any. I’ve been renting and the thing we have here is a [expletive] meter to put coins in,” says Lam.

“And because it was three different types, I didn’t know what else to send them. I just sent whatever else I could,” she says, laughing.

Lam, who grew up in Ireland, says she didn’t have anything under her name during her student years.

Kirwan, the solicitor at the firm KOD Lyons, says the department’s demands for the level of evidence required to prove continuous residence are unreasonable.

“It’s nearly disproportionate to have a very strict documentary-based system,” says Kirwan. “I don’t think it’s fair for anyone because what happens if you pay with cash in hand, or you haven’t kept your receipts from going to Tesco.”

A spokesperson for the Department of Justice said that “Providing in-country banking transactions (debit or credit card) is an easy and time efficient way for applicants to demonstrate residency over a prolonged period of time.”

Most people can easily show that evidence, they said. “If an applicant is not in a position to provide evidence of such transactions, they can demonstrate their residency in other ways.” They didn’t say why three types of proof were needed.

The department’s citizenship office is aware of a small number of cases where would-be citizens couldn’t provide all the required residency evidence, they said. “In these instances, we work with the applicant in a proactive matter [sic] to bring about a resolution.”

Lam says it’s challenging to work with or get an answer from the department’s citizenship office via email or by phone.

“You can never get through to anyone on the phone, send email, never get a response,” she says.

Wendy Lyon, the solicitor at Abbey Law, says she is concerned about the intrusive nature of some of the documents needed to prove residency.

“A lot of very private and personal information can be gleaned from a person’s bank statements; some of it would certainly fall into ‘special category data’ under GDPR which is subject to heightened rights of privacy,” she says.

“I don’t believe the Department of Justice needs this volume of documentation to establish whether a person has actually been resident in the State for five years and therefore it would seem to be disproportionate and unlawful to require it,” she said.

Not everybody applying for citizenship does so on the grounds of residency.

People applying under the “Irish associations” criteria of the Citizenship Act can apply from overseas, and are usually people with Irish ancestry.

Lam says she thinks it’s unfair that some people have to show three types of evidence that they’ve been here while some can apply from overseas even if they have never lived here.

“It’s really a racist thing because it’s purely based on the categorisation of like, you have that blood in you,” she says. “And then there are kids who are born here and can’t get a passport.”

A Department of Justice spokesperson said that Irish citizenship is a privilege and an honour, granting EU-wide rights, and it is important to have an appropriate procedure in place to uphold the integrity of the process to achieve it.