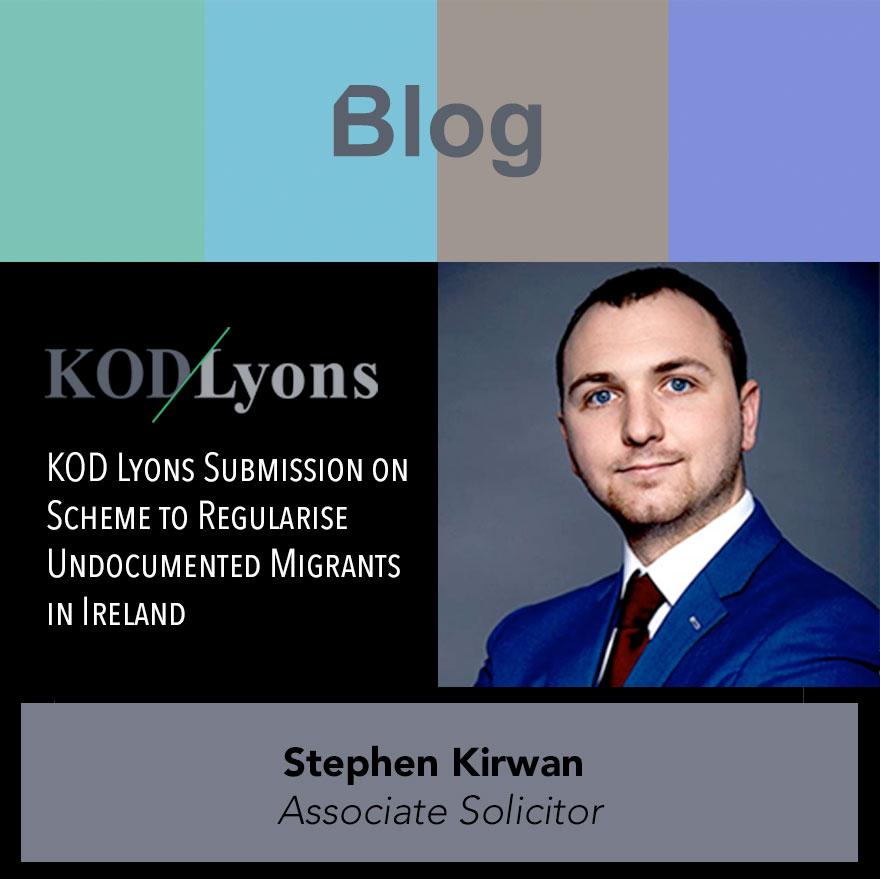 Stephen Kirwan highlights the recent submission made by the Immigration and International Law Team to the Minister for Justice.

The Immigration and International Law Team in KOD Lyons Solicitors recently drafted a response to the Minister’s recent call for submissions contained in the “Consultation Paper on the Scheme to Regularise Undocumented Migrants in Ireland”. The paper proposes to introduce a comprehensive scheme which offers a legal pathway for the undocumented migrants to regularise their status in the jurisdiction and contains a commitment by the Minister to introduce such a scheme prior to the end of the year and has invited responses from stakeholders in respect of a number of questoins.

Overall the team cautiously welcomes the call as something which has the potential to be very progressive and to offer hope to the thousands of people who have built their lives here in Ireland and hopes that the Minister will take its suggestions on board when designing a new scheme.

The scheme is for persons considered to be long-term undocumented persons living in Ireland for a minimum number of years. Do you have any views on how undocumented should be defined in the context of this Scheme and/or in relation to the residence requirements and how these should be verified?

In order to ensure equitable operation of the Scheme it is important to ensure that those who have attempted to regularise their position previously are also covered. Definition be significantly robust to account for the following:

Inclusion of reference to ‘family members’ in definition

It is submitted that family members of applicants should be included in the definition in order to ensure that they are eligible to be considered without having to make a separate application and should include children, step-children (legal and de facto), spouses, civil partners and suitably qualified de facto partners. There may be certain scenarios where certain family members may not necessarily meet the definition of being ‘undocumented’ themselves particularly if the Minister is minded to introduce a stringent definition of prior residence. It would be unreasonably harsh to potentially grant regularisation to one family member and leave other family members at risk of deportation, ultimately forcing a qualified applicant to choose between remaining in the jurisdiction and continuing family life outside.

Those who are in the international protection process should also be considered ‘undocumented’ for the purposes of the scheme. It is noteworthy that while those who are in the international protection system are entitled to be considered for permission to remain it is submitted that if the scheme is to be operated in a more progressive manner it would be overly harsh to exclude applicants from consideration merely because they have sought to regularise their position in an alternative way.

The definition should also cover those who are in the Dublin III process and have subsequently ended up in the substantive international protection process and those Applicants who have either been given permission to take a subsequent asylum application or are seeking to do so pursuant to the relevant provisions of the International Protection Act 2015. It is submitted that the exclusion of such categories of applicant would be unduly harsh.

Non-Exclusion of those who have Extant Deportation Orders

Those who may have otherwise qualified under the regularisation scheme but for the fact that they have been given a deportation order should not be denied the opportunity to make an application for regularisation under the scheme.  We would contend that to do otherwise would be unduly harsh and not in the interests of justice.

Residence Requirements and Verification of Documents:

Account must be had for the fact that many undocumented migrants face very specific challenges in relation to the provision of identification documentation. As the Minister no doubt appreciates it is often it is impossible for large numbers of undocumented migrants to open bank accounts/statements, obtain driving licences or in some cases provide updated national identification documents.[1]

As a result, it is recommended that the Minister should take a very practical view of the acceptable forms of residence which might be presented including carrying a holistic assessment of available evidence. This could include considering factors such as the availability of exit/entry stamps on passport and sworn evidence from third parties confirming the presence or otherwise of the applicant in the State.

Do you have any views on the proposed eligibility criteria and what supporting documentation should be required?

We would have several short observations in relation to the proposed eligibility criteria.

We would contend that the introduction of an income requirement would have a disproportionate impact on applicants and should not be considered given the negative impact that irregularity of residence status has on individuals and their families.

The research in this area from various groups argues that irregularity impacts upon aspects of life other than work, including family life, health services and education and has also led high incidence of low pay and exploitation even in circumstances where employees are paying taxes etc.[2]

No requirement to have engaged in ‘lawful’ work:

In a report conducted by the Migrant Rights Centre in 2014 it was indicated that one-third of respondents were currently paying taxes with almost half reporting that they had paid taxes at one time in the past.[3] The ESRI[4] conclude this trend of illegal employment is driven by the precarious nature of their status and the particular vulnerability as undocumented workers. It is recommended that any scheme, in order to be as inclusive and equitable possible, needs to ensure the non-penalisation of individuals and employers for providing evidence of ‘cash in hand’ work.

This is addressed more fully as part of Question 1 but is also relevant for consideration here.

Character and Conduct as a Factor

It is accepted that it may be legitimate for the Minister to consider the character and conduct of those applying the scheme when determining eligibility. However, it is submitted that it should not be given undue weight and regard needs to be had by the Minister to the seriousness of the alleged offences and the nature of the sanction imposed in a given case. Further, a ‘character and conduct test’ should not be conducted in isolation and must be considered in the context of the other factors presented and should go further than ‘poor conduct’.

In order to provide adequate safeguards to an applicant’s interests it is recommended that character be only considered as a factor in refusal if the conduct represents a present threat to the security of the State having regard to the entirety of the factors presented.

Duration of Residence in the State

In order to ensure the scheme is operated in a fair way the Minister should not operate a strict policy of excluding applicants purely based on the length that they have been undocumented. The indication that applicants would require a period of 4 years residence in the State without an immigration permission does not consider where individuals may have only fallen out of status in recent times but may have a very extensive period of prior lawful residence. This would respectfully be an inadvertent penalisation of those who may have been taking steps to regularise their position in the State.

It is submitted that given the various difficulties highlighted above in relation to the Minster that the requirement to provide verifying documents of residency should not be overly onerous or prescriptive.

As noted above it is recommended that the Minister take a very practical view of the acceptable forms of residence which might be presented including carrying a holistic assessment of available evidence. This could include taking into account factors such as the availability of exit/entry stamps on passport and sworn evidence from third parties or employers confirming the presence or otherwise of the applicant in the State.

It is proposed that the immigration permission to be awarded will allow unrestricted access to the labour market. Are there any points you wish you raise in relation to the permission to be granted?

It is submitted that successful applicants should be granted unrestricted access to the labour market and that lessons should be learned from previous schemes that seek to add a level of complexity to this position.

For example, in 2018 the regularise certain non-EEA nationals who came into the State lawfully under a student permission, and who had maintained a lawful presence for at least two years were given the opportunity to apply for a Stamp 4S. This led to a large degree of confusion for certain clients in relation to the extent of their rights and entitlements.

It also had a practical impact for certain individuals who were seeking to gain employment given that many employers were unfamiliar with the rights and benefits granted to recipients of the Stamp 4S as it appears ot have been unclear. A similar situation has arisen for many clients who have been granted a Stamp 1 permission without the need to apply for a work permit and a more simplified approach would hopefully avoid unnecessary confusion for applicants and would ultimately be of benefit to the Irish economy.

This simplified approach towards accessing the labour market needs to be considered in tandem with root and branch reform of work permit system, which is overly restrictive, illogical and not fit for purpose.

In order to ensure maximum participation, it is incumbent on all stakeholders and not just the Minister’s Department to publicise the scheme widely across traditional and social media platforms. Not only should this include NGOs and those who work with migrants but also through employer groups and other community organisations. Making the process as facilitative and user friendly as possible and available in as many languages as possible would be of significant benefit.

It is proposed to have an online application system. How can we make this process as simple and accessible for applicants?

It would be helpful if the Department could consider both online and paper-based applications. While it is accepted that this might not be administratively workable our experience with previous schemes is that many applicants due to lack of resources wish to submit applications on their own behalf as opposed to coming through an office such as ours or an NGO.

How will your organisation help to promote the scheme to eligible persons and support them to apply?

Our firm plans to make our clients aware of the scheme by publicising the scheme once finalised on our website. We plan to keep clients up to date with regular blogposts on the topic and we hope to offer interactive Q and A sessions either through Zoom or ‘webinars’ to encourage as many people to apply as possible.

If you require assistance or have a query in relation to whether you might be included in the new scheme do not hesitate to contact Stephen Kirwan of this office at stephen.kirwan@kodlyons.ie or at 01-6790780