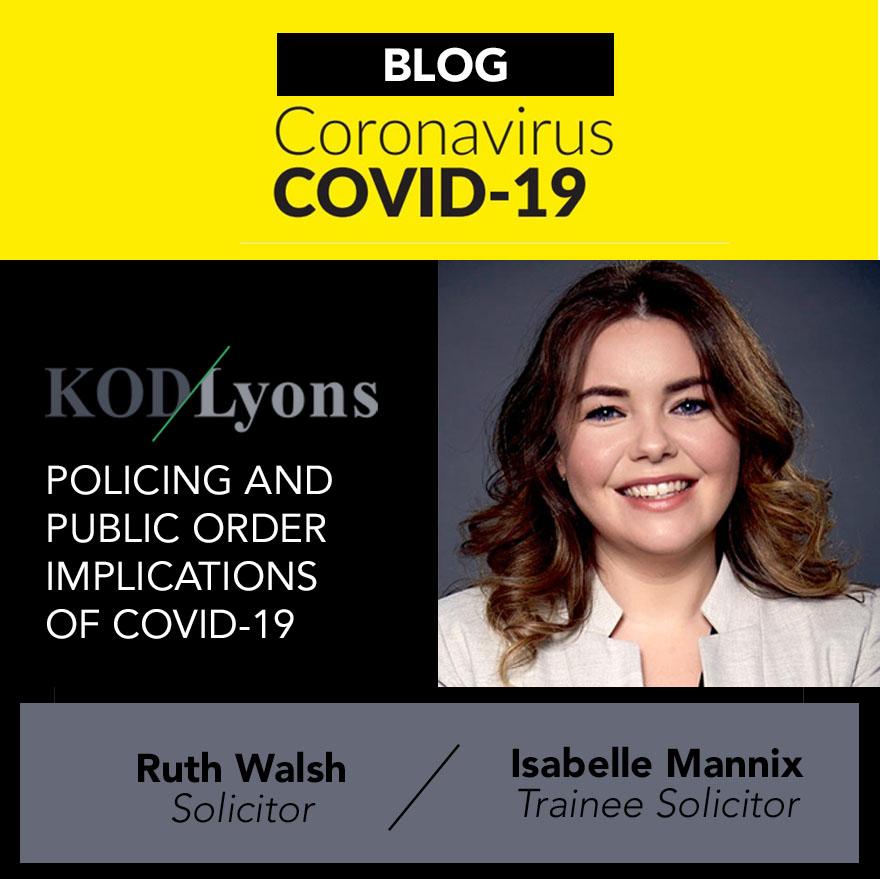 With the introduction of severe restrictions on public gatherings and events in light of the Covid-19 outbreak, some thought must be given to how those restrictions will be policed going forward. Members of An Garda Siochana have been given vast powers of arrest since the introduction of the Criminal Justice (Public Order) Act, 1994.  This Act deals with how people are permitted to behave in public places and also provides for crowd control at public events. A ‘public place’ includes roads, public parks or recreational areas, cemeteries, churchyards, trains, buses and other public transport vehicles.

Of particular interest in this rapidly developing scenario is the offence contained within Section 8 of the 1994 Act. This deals with a failure to comply with the direction of a member of An Garda Síochána. Under Section 8, it is an offence to not comply with a Garda’s request to stop behaving in a way that they believe is endangering people’s safety, property or the public peace. Gardai can ask people to move on to avert any potential trouble, thus not applying the full force of criminal law (arresting, charging and cautioning them before bringing them before the courts). If this request is not complied with however, a person may be found guilty under Section 8, unless they have a reasonable excuse or lawful authority to do so. A person convicted of failing to comply with a Garda direction under Section 8 is liable on summary conviction to a class D fine, of up to €1,000, or to a maximum term of 6 months in prison, or both.

This is a section of the 1994 Act that is commonly prosecuted before the District Court as it stands and would seem to be applicable to the current situation. The section provides that where a member of An Garda Siochana finds a person in a public place and suspects, with reasonable cause, that such a person “…is acting in a manner which consists of loitering in a public place in circumstances…that give rise to a reasonable apprehension for the safety of persons…”. The relevant Garda is then empowered under the section to direct the person so suspected to leave the vicinity immediately.

The Government has now passed The Health (Preservation and Protection and Other Measures in the Public Interest) Act 2020 which gives the Minister for Health broad powers to make Regulations to prevent, limit, minimise or slow the spread of COVID-19. The Act does not itself introduce any restrictive or protective measures: it gives the Minister power to do so should the need arise.

The Act gives powers to members of An Garda Siochana which can result in fine of up to €2,500 and/or 6 months in prison if not complied with.

At the time of writing, the Minister for Health has not triggered any regulations, which provide the gardai with the powers recently enacted.

Recent media reports have highlighted alleged instances of spitting at other members of the public or at emergency workers and other frontline personnel. Spitting, or the threat of same, can constitute a Section 2 offence under the Non Fatal Offences Against the Person Act 1997, which can be dealt with summarily only in the District Court and which carries a maximum penalty of six months imprisonment. There is an offence under Section 6 of the same Act, which addresses spitting of blood, but does not extend to saliva.

In terms of bail applications in such instances, as the offence is summary only, bail cannot be refused on the grounds that if released there is a reasonable likelihood that a further offence will be committed. Under what are termed the traditional O’Callaghan principles, bail can be refused if the court is satisfied that the defendant would not turn up for subsequent court appearances of if there is a likelihood that they would interfere with witnesses.

Only time will tell whether the powers afforded to An Garda Siochana under the Public Order Act 1994 will continue to be sufficient as the situation surrounding the Covid-19 pandemic evolves and the Government continue to review the restrictions in place. It would appear that the vast majority of the public are taking the restrictions seriously and this should hopefully be reflected in the number of District Court prosecutions under the Public Order Act going forward.