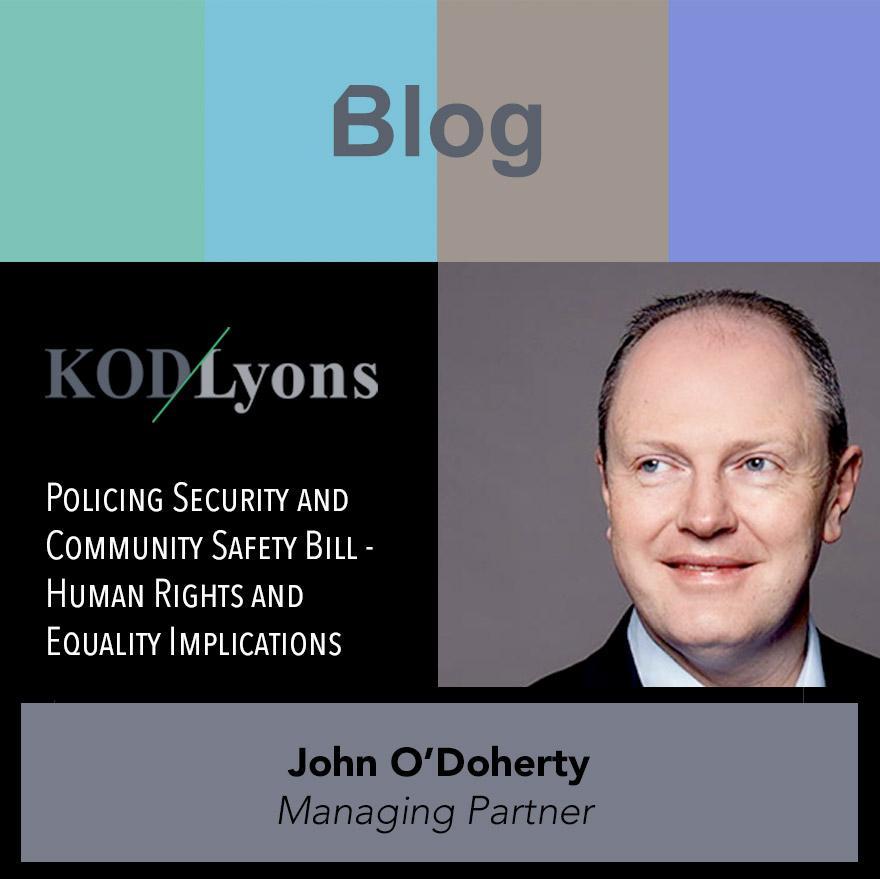 John O’Doherty Managing Partner of KOD Lyons makes short observations on some of the human rights and equality implications posed by the General Scheme of the Policing Security and Community Safety Bill.

As part of the government’s commitment to implementing the recommendations of the Commission on the Future of Policing in Ireland (CoFPI) the Minister for Justice published the General Scheme of the Policing, Security and Community Safety Bill in 2021. The Bill seeks to provide a comprehensive set of reforms to the policing and security structures in the jurisdiction. The Bill covers a vast number of issues. However, there are significant human rights and equality concerns raised on foot of the General Scheme’s publication which are of significant concern. In particular this blogpost briefly focuses on some concerns about the independent governance and monitoring of An Garda Síochána effected by Bill as well as the human rights and equality standards.

Independent Governance and Monitoring of An Garda Síochána

The enhancement of independent governance and monitoring of An Garda Síochána as a positive development. Clearly the roles and duties of any new agencies will require to be clearly outlined and every precaution taken to ensure compliance with the principles of human rights and community safety is upheld.

In particular, the introduction of a new Policing and Community Safety Authority with an increased independent role for the Office of the Garda Síochána Ombudsman is provisionally welcomed in terms of increasing transparency and accountability. Despite this there are some observations to be noted:

Head 104 makes provision for the Policing and Community Safety Authority to conduct, at its own initiative, inspections in relation to any particular aspects of the operation and administration of An Garda Síochána which relate to policing services. Greater clarity will be needed in respect of what such inspections might involve including the precise powers to be granted, whether there is compliance with international instruments such as the Optional Protocol to the Convention Against Torture (OPCAT) once ratified by the State and how this might be monitored.

Although Head 154 addresses the confidentiality of information obtained by the Garda Síochána Ombudsman and his officers, it is concerning that complainants, particularly vulnerable complainants, may still be fearful of retribution for making a complaint against a member of An Garda Síochána.

Consideration needs to be given to strengthening the function of the Garda Síochána Ombudsman to allow people to raise concerns without necessarily making a complaint while also balancing the rights of a complainant against the right to fair procedures.

Minister McEntee, in introducing the General Scheme, emphasises its commitment to progressing human rights issues in policing.[1] Having made this commitment however it is unclear whether a human rights impact assessment has already been conducted in relation to the General Scheme. Any such assessment should be published and should adequately consider the full extent of resources required to ensure the legislation is effective in accounting for the human rights and equality implications.

Further it is noted that in order to ensure that human rights and equality standards and values are adequately catered for, the Policy and Community Safety Authority should ensure that any Code of Ethics should look to deal with breaches of human rights standards.

It is hoped that the above observations, amongst others, can be dealt with upon further consideration of the General Scheme.