For Non-Ukranians Fleeing the Russian Invasion, Ireland’s Borders Remain as Hard as Ever 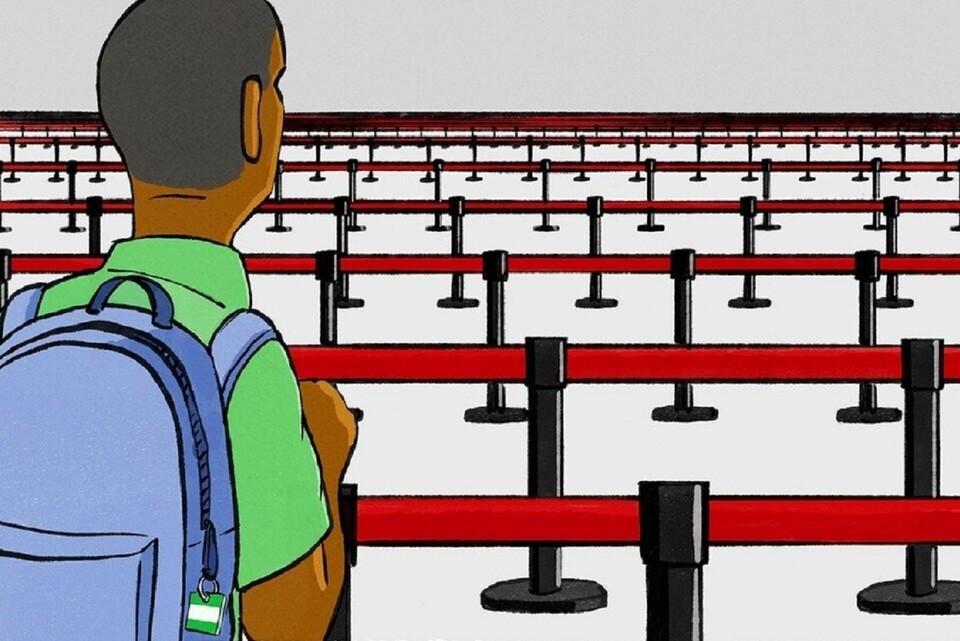 Obinna Nwako was asleep, he says, when the first sound of an explosion ripped through the silence of the night in Vinnytsia, a small city a few hours south-west of Kyiv.

“It was quite traumatic. All the sirens went off in the city,” said Nwako last week on a Zoom call from Bucharest in Romania.

He packed a small bag and ran down to a friend’s apartment on the first floor. “Just to feel safer,” he says.

Nwako, 24, is a medical graduate from National Pirogov Memorial Medical University Vinnytsia in Ukraine. He recently enrolled in a speciality programme to become a psychiatrist, he says.

He’s a Nigerian citizen, but his family live in Dublin – his parents are on a Stamp 4 immigration permissions, while his teenage sister is an Irish citizen.

On 28 February, when he crossed the border to Romania, Nwako thought he would be able to travel from there to Dublin, he says, that he would tell staff at the Irish embassy in Bucharest that his family lived here, show their documents, and come join them.

“The lady there told me that there was nothing that she could do, that the visa waiver applied to Ukrainian citizens,” says Nwako.

European Union countries currently have an open-border policy for refugees fleeing Ukraine, but some non-EU citizens escaping the same war still face a hard border, no matter the circumstances.

A spokesperson for the Department of Justice said it couldn’t comment on individual immigration cases. But the EU Temporary Protection Directive applies to Ukrainian citizens, they said.

It “also applies to people who were residing in Ukraine before 24 February 2022 with a permanent Ukrainian residence permit, who cannot safely return to their country of origin,” the spokesperson said.

As of 30 March, 16,000 people had arrived in Ireland seeking temporary protection, said the spokesperson, including almost 400 third-country nationals.

Over Zoom from his hotel room in Bucharest, Nwako says that, as a student, he only had a temporary Ukrainian residence permit, not a permanent one.

“I just don’t know what’s going to happen. Most of my friends have gone back to their homes in Nigeria, I literally have no home to go to, even if I wanted to,” he says.

Nwako watched as his friends with homes in Nigeria got in touch with the embassy to return.

“I thought let me get to Bucharest and get to the Irish embassy to explain my situation. I had hope, you know,” he says.

Even before getting out of Ukraine, Nwako had a bad feeling about the move. “If I’m being honest, I actually felt safer being in Ukraine. I know it sounds crazy now.”

He and his friends’ journey out was tough, he says. When they tried to cross a border to Romania, they were pushed and jostled by a sea of people, and the war’s shock had some turning against people of colour, he said.

“There was a Ukrainian lady who kept saying to me and my friends, ‘Go back to your countries, leave Ukraine,’” says Nwako.

“We were like, ‘We’re all trying to leave Ukraine; that’s the whole point of being here,’” he says.

Last Tuesday at a café inside Blanchardstown shopping centre, Ifeyinwa, Nwako’s mother, says she cries about her son every day.

“If they let him come here, whenever his school is on, he can go back,” said Ifeyinwa adjusting her face mask.

“He’s a very intelligent person. Allowing him to go into depression like that, it’s totally unfair,” she says.

A spokesperson for the Department of Justice said the Minister for Justice lifted all visa requirements for Ukrainians on 25 Feburary.

“However, those who are from a country that is visa-required to travel to Ireland will still need to apply for a visa to travel to the State,” they said.

It’s somebody’s passport that determines whether or not they need a visa to enter Ireland, not where they usually reside, the spokesperson said.

It’s impossible to lift visa requirements for a certain nationality on the basis of living in Ukraine, “without this applying to all nationals of that country, regardless of where they normally reside”, they said.

Stephen Kirwan, an associate solicitor at the law firm KOD Lyons, says that while the Department of Justice’s argument is legally sound, it fails to mention the discretionary power reserved for the Minister for Justice in the Irish visa system.

“There are humanitarian factors that can get the minister to expedite the processing of a visa, and because you will be processing an application quicker for one person that doesn’t necessarily invalidate the integrity of the process,” says Kirwan.

That doesn’t mean that the minister should do it for everybody either, he says,

Kirwan says he understands that the integrity of the visa system should be upheld, but the idea of ministerial discretion is embedded in the law for exceptional circumstances like Nwako’s case.

“If you’re reviewing one case on its own merits, I don’t think it hurts the integrity of the visa system, that’s the whole point of having humanitarian exemptions,” Kirwan says.

Nwako says the Romanian government allows people like him to stay there for three months without papers, but he’s not sure what happens afterwards.

Ifeyinwa says her teenage daughter has emailed Irish government officials, pleading with them.

In an email to the Department of Foreign Affairs visa office, Ogochukwu, Nwako’s sister, says she’s an Irish citizen, born here in 2004, and that her family moved to Dublin permanently in April 2021.

Her parents were paying her brother’s bills while he studies. He was finishing a speciality programme in psychiatry in Ukraine “with the prospects of sitting for the Irish medical exams, PRES in Ireland shortly”, she wrote.

“My brother cannot go back to Nigeria because we have no home there and if he goes, he won’t have anywhere to stay, but to sleep on the streets,” says the email.

“Please, under compassionate grounds, as the Ukrainians have been granted express visas because of the war, can my brother also be granted an express visiting visa?” Ogochukwu writes.

She writes that her brother will return to Ukraine as soon as the country’s safe again, attaching a copy of her Irish passport to the email.

Someone writes back saying her brother needs to apply for a visa at the Irish embassy in Bucharest. In another email, they repeat the same line.

“Your brother can of course apply for a visa for Ireland which will be placed in a [queue] for processing,” says the email.

Ogochukwu emails them later to say that the embassy has told her brother that it can take a long time to process the visa application.

She asks them to grant “my brother a priority visa to enable him to come over here and stay with us”.

Ifeyinwa, their mother, shakes her head. None of that worked, she says.

Nwako says that while in Romania he’d applied for a visa to sit an English language competency exam for medical graduates known as the Professional and Linguistic Assessments Board (PLAB) test in Sheffield in the United Kingdom on 26 May, as is necessary to be a doctor in an English-speaking country.

He had booked a spot to take the exam in October 2021. He didn’t want to lose it, he says. “It is really difficult to book this test because available dates are released like 6-7 months in advance for the whole year, I was lucky to get a date in May.”

He says he thought he’d travel from Dublin to sit the exam before realising that he wasn’t allowed in Ireland without a visa.

But the United Kingdom rejected his visa application. They told him that because he wasn’t qualified in Romania he couldn’t really take that test in the UK, he says. “But I made it clear that I had fled Ukraine in my application.”

He doesn’t have his passport back yet from that application to use for a tourist visa application for Ireland, he says.

Nwako says he used to lock himself into his hotel room when he first got to Romania, worrying and trying to process the reality of what happened, and what might happen next. “I actually had a couple of panic attacks.”

He’d try to watch television to forget, he says. In recent days, he’s talked himself into getting out and strolling around the streets of Bucharest, says Nwako.

Sometimes, Nwako grapples with the guilt of leaving his friends, Ukrainian men who had to stay behind and fight.

“Our friends I’ve known for like, six, seven years, right? And they physically couldn’t leave,” he says.

Now that he’s out anyway, he wants to be with his family, Nwako says.

“I just want to say if someone from the higher up is hearing this, that I just want to go back to my family, people I actually know.