Can I be charged for an assault in sport? 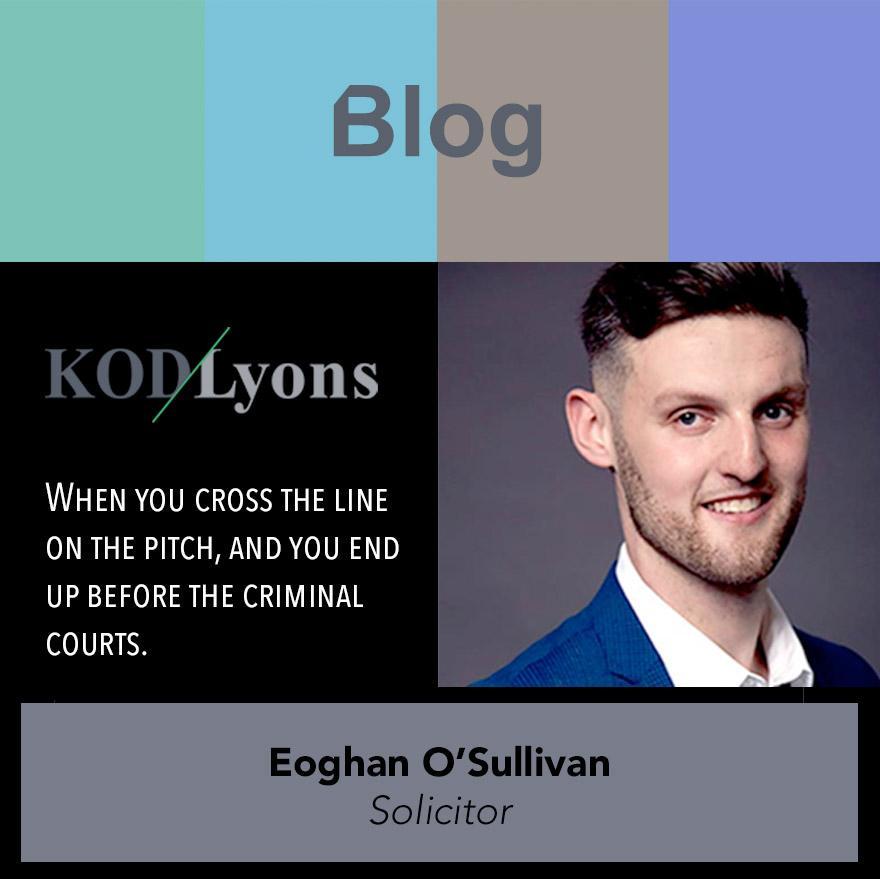 When you cross the line on the pitch, and you end up before the criminal courts.

Can I be charged for an assault in sport?

As we begin a new season of GAA games, we have already seen some exciting and amazing displays of athleticism from the best that our counties have to offer in both hurling and football. However, we have also seen some unfortunate scenes of violent behaviour.

The Armagh v Galway Quarter Final and the Armagh v Tyrone League Game spring to mind this year with some scenes being described as “disgraceful” and “scandalous”.  Unfortunately, this is not something new to the GAA. We remember the “Battle of Omagh” between Dublin and Tyrone as well as the Meath and Mayo games in the 90’s.  We all appreciate a rush of blood in the heat of the moment during a battle on the field.  There have been examples of punch ups, melees and eye gouging on display. However, when does this type of behaviour cross the line and could a player’s actions on the pitch result in them being charged with assault brought before the criminal courts?

The simple answer to that question is yes. Where the actions of someone participating in a match are both outside the playing rules and the playing culture of the sport, they may be exposed to criminal liability, depending on the level of violence and the injuries inflicted.  Depending on the conduct and a complaint being made to An Garda Síochána, a person could be charged with assault.  There have been many examples in Irish Courts of participants in sports games being prosecuted for on the field assaults and receiving convictions.

In Ireland, there is no legislation specifically dealing with an offence of sporting assault and this is something that has developed through case law. Once an assault that allegedly took place during a sporting encounter is reported to An Garda Síochána, the Director of Public Prosecution will ultimately decide whether or not to criminally prosecute the accused. There is also a risk that the matter will be pursued through the civil courts which could result in the accused being ordered to pay compensation.

When does a Player’s behaviour on the Pitch Cross the Line?

It is generally accepted that there is a culture within the sporting world of not making a formal complaint for incidents of violence on the pitch.  Whenever a person sets foot out on the sporting field, they are implicitly consenting to some form of physical contact and risk of incidental injury which may occur as a result.  Gaelic Footballers, for example, consent to being pulled, dragged, shouldered and tackled fairly within the rules.  Hurlers consent to the same and even the possibility of being struck with the hurl in the course of the game. Boxers get punched, rugby players get very physically tackled, including dangerous high tackles and footballers consent to strong challenges.

However, the Courts are willing to attach criminal liability where the actions of someone participating in a match are both outside the playing rules and the playing culture of the sport, depending on the level of violence and the injuries inflicted.  This can be the case even where the assault took place on the field and players have ended up with criminal convictions as a result.

In the case of R v Billinghurst[1], for example, the defendant was convicted for inflicting grievous bodily harm to an opponent during the course of a rugby game after he broke another players jaw.  It resulted in the first ever prosecution for a sport field assault causing mere injury rather than death[2].  This however was an off the ball incident and in being so was more likely to have criminal liability attached to it.

In DPP v McCarton, a County Down Gaelic Footballer was found guilty of assault after he broke the jaw of a County Westmeath Gaelic Footballer during an arranged game between the two counties. In this case, the Court held that “to strike someone without legal justification is a crime, whether it takes place in the street, in the family home, or the football pitch or elsewhere”.

It is in the 2010 case of R v Chapman[3] (an English case) where we see the first ever player jailed for a criminally on the ball tackle on an opponent, creating British legal history, thus showing that there is criminal violence both on and off the ball.  The extent to which such violence can be devastating is evident in the R v Forwood[4] case, in which the accused was charged with sports related manslaughter resulting from the death of an opponent during a game after receiving a single fatal punch to the head in the aftermath of a Sunday league football game.[5]

What we have seen over the years is that the Court is willing to consider contact between players as an assault, in particular where the conduct falls outside of that which any sports person would implicitly consent to.

The Barnes[6] decision is one of great importance in the matter of criminal liability in sport as it not only sets out a proper course of action with regards to implied sporting consent and if and when said consent has been breached by such level of harm inflicted, it also highlights its significance in relation to the aspect of “playing culture”.

The Barnes case is an English case in which an amateur footballer was seriously injured while playing a match.  As a result of a tackle during the match with the defendant, it left the victim with a seriously injured leg.  The allegation was that the tackle was “crushing, late, unnecessary, reckless and high”.[7]  The defendant was convicted of maliciously inflicting grievous bodily harm contrary to section 20 of the Offences Against The persons Act 1861.  Mark Barnes was sentenced to a 240 hour community punishment order and ordered to pay compensation of around £2600. The defendant appealed to the Court of Appeal based on a number of grounds.  These seven grounds relate to specific aspects of the trial judge’s summing up, but taken collectively they amount to the contention that the trial judge failed, in his summing up and in response to a question asked by the jury after they had retired[8] as to what facts needed to be established before they could return with a conviction for the accused.  However one of those grounds was the argument that the defence of consent was not raised by the judge as a possibility of acquittal for the jury’s consideration.  In addressing the matter of whether consent is an available defence, two questions were posed: To what may the participant consent? When will they be deemed to have consented, and to what extent?[9]

In coming to the conclusion to which the degree to consent is legally possible, the Court of Appeal, stated that;

“If what occurs goes beyond what a player can reasonably be regarded as having accepted by taking part in the sport, this indicates that the conduct will not be covered by the defence.”[10]

This case also placed importance on the playing culture within the sport.

The idea is that “Playing Culture”, does allow for certain conduct not within the strict rules of the sport at hand to be admissible and consented to as such conduct would be considered to be typical during such sport.  Tugging on your opponent’s jersey, irritating them off the ball by bumping or holding them, these are the kinds of actions that may be considered an assault off the pitch however on the field of play they are incidental to the game.  Although, if these actions occurred on the streets they could be deemed as criminal, there is no way that these actions on the pitch should be prosecuted as an assault afterwards, as they are implicitly consented to as part of the culture of the game and are part of the expected vigour of the game.

This idea of playing culture is an attractive one as they allow for the actions which go beyond the rules of the game to be accepted so long as they are prevalent in any given match, whilst at the same time disallowing wholly illegitimate actions.[11]   Depending on the nature of the incident, where such actions occur they could be subjected to punishment from the internal sporting disciplinary mechanisms available rather than subjected to the harshness of a criminal sanction.[12]

It is argued that when partaking in sport, players accept that in the heat of the moment, contact will take place in on the ball incidents, which can result in injury.  However, in the Barnes decision it was accepted that such conduct is an integral part of the game which players simply cannot avoid, even though technically against the rules, therefore implicit consent must be given to such actions, negating the possibility of criminal charges.

Please feel free to contact Eoghan O Sullivan of this office if you require any further information in relation to disciplinary matters within sporting organisation or allegations of assault within a sporting context.

[11] Ben Proctor, When Should Criminal Liability be attached to Harmful Challenges in football? The Student Law Journal, available from http://www.sjol.co.uk/issue-3/criminal-football accessed on May 14th 2013